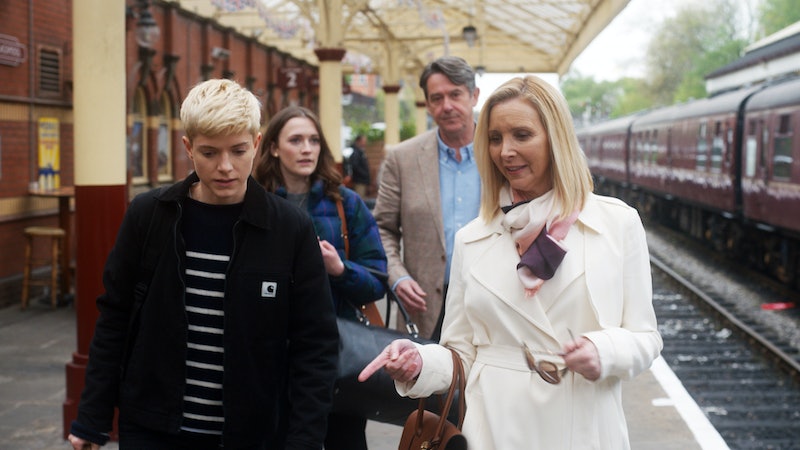 Mae Martin's brain is magnificent, and I'm so glad even more people will be acquainted with it now that her hilarious semi-autobiographical miniseries is on its way. Right now Martin's possibly best known for her standup comedy, but she's temporarily left the stage in search of further stardom on the screen. You'll get to know the comedian more when her show premieres, but when is Mae and George out on E4? Its incredible script attracted some big hitters, including Lisa Kudrow, who's just joined the cast of the comedy that will soon have everyone talking.

While a Mae and George premiere date has yet to be announced, as the Radio Times reported on Tues, April 30, production is reportedly underway, with filming currently taking place in Manchester. Since that doesn't give you much indication as to when you can expect to start falling in love with Mae and George, I've contacted one of the show's reps to see if they can give any info away on a release date. So watch this space.

It's still fairly early days, though. E4 only just commissioned the show at the end of March, which Channel 4 announced on March 27, as well as revealing that it'll be made available on Netflix alongside its release. Honestly, it's been a while since I've anticipated a show like this. I can't wait.

According to Channel 4's original press release, the series will be comprised of six thirty-minute episodes, as it "follows recovering addict and comedian Mae, who is trying to control the addictive behaviours and intense romanticism that permeate every facet of her life." But a spanner's thrown in the works when she takes a detour into an "all consuming relationship with her new girlfriend George." I feel like I've seen that scenario played out so often in real life, but hardly ever on television.

Channel 4's Head of Comedy Fiona McDermott seems just as excited about it as I am, as she said she was "thrilled to back Mae on this project." Clearly a fan, she went onto say how Martin's voice "fantastically captures the inelegancies of being young, now. She riffs from vulnerable to intense to hilarious and it all feels so real and refreshing. Mae and George is totally unique and totally accessible." Even though it's still early days, as I said, I can't help but feel this show has the potential to fill the void that Fleabag has left behind.

But if you still remain unconvinced, then I have two words to get you on this hype train with me: Lisa Kudrow. On Tues, April 30, Channel 4 announced that the former Friends star would be joining the cast. She'll be appearing as Linda, Mae's charismatic mother, who Kudrow says she's "thrilled to be playing." And it's all because she fell in love with the script. "It’s sweet and very funny and awkward and well observed,” Kudrow says.

So while you endure this indefinite wait, if you're not yet acquainted with Mae Martin, then I highly recommend some of her standup, which you can find on her YouTube channel. It might just give you a taste of some of the genius to come.

More like this
Is The Serpent Queen Based On A True Story?
By Maxine Harrison
8 Photos Of Prince George & Princess Charlotte At Queen Elizabeth II's Funeral
By Jake Viswanath
Prince George & Sophie Wessex Shared A Tender Moment At The Queen’s Funeral
By Jake Viswanath
The 'Skins' Cast Shared The Reunion We’ve Been Waiting For
By Sophie McEvoy
Get The Very Best Of Bustle/UK