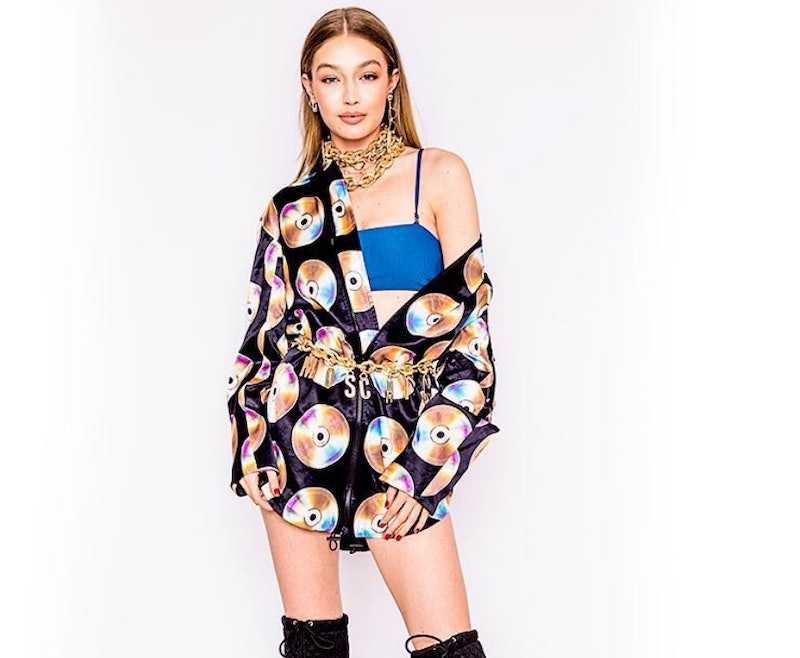 The next H&M designer collab is upon us. The discount retailer has done high x low mashups with Alexander Wang, Balmain, Kenzo, and more. Now, H&M has teamed up with Moschino for a line called Moschino [tv] H&M. Expect the bright, colorful, and pop culture-driven designs of creative director Jeremy Scott to take over the fast fashion giant this fall.

Scott confirmed the news at his annual Coachella party over the weekend, recruiting supermodel Gigi Hadid to help him make the announce. The retailer has already shared a campaign image featuring Hadid rocking the collection.

Moschino [tv] H&M arrives on Nov. 8. The collection will be sold both online and in stores. Expect a fashion frenzy, lines around the block at physical stores, and crashing servers for digital shoppers.That's how big this one is going to be.

Scott told Vogue that he is stoked to bring the brand's adventurous aesthetic to a larger cross-section of customers at an affordable price point. He said, "This collaboration makes me feel like I'm able to give something again. Lots of young people love my clothes… and we make phone cases and little things like that, but in order to have a lewk, I love that this is now something that will be affordable."

He also admitted that the challenge has been translating the brand's vision and distilling it into a capsule specifically created for the fast fashion set — without lowering its overall fashion stock. He told Vogue, "How do I give you the elements and the look and the feeling of Moschino, but how do I not wreck the mothership while doing it?"

Clearly Scott thought about this collection on a deep level. As a result, there is no way it can't be good.

Here's the very first look at the range. Moschino [tv] H&M will start as low as $25 and go as high as $300. It's a reachable line for those who love the Moschino ethos but often find the clothes out of their price range.

The collection will include both menswear and womenswear, along with accessories and some other pieces that are to be revealed. Vogue reports that there are about 45 women's pieces and approximately 20 men's items.

Scott spoke about a silver sequined parka dress, puffer jackets, denim, and "cropped things or double-long things" when describing his H&M collab. He even mentioned a piece that looks like a hockey jersey with a train. It sounds unusual and gloriously fashion forward. So it sounds very Moschino.

He also beamed about creating "the tiniest biker bag ever," which could double as a necklace. He wanted to release it via the main Moschino line, but the production never happened. So he added it to the H&M collection.

If you have been following H&M's partnerships with high-end designers, you'll remember that the Alexander Wang collab was like a dystopian athleisure uniform. Wang's point of view was incredibly visible.

"Balmainia" ensued with the Balmain collection, which was full of rich colors and fabrics and had the support of fashion's A-list. Both sold out rather quickly and were loved by celebs and regular shoppers. Moschino [tv] H&M should enjoy a similar response when it lands in the fall.

Scott recently collaborated with MAC for a makeup collection that took inspo from the mixtapes and boom box radios of the '80s. He also designed a line of UGG boots, complete with flames and other bedazzled designs. Both of those collabs were independent of Moschino. However, the Moschino x Sephora makeup collection was gold, glorious, and teddy bear-focused. Moschino and Scott have been dipping their toes into the mass world and the formula is working.

We couldn't agree more. It's going to be the mother of all high x low mashups with Moschino [tv] H&M.