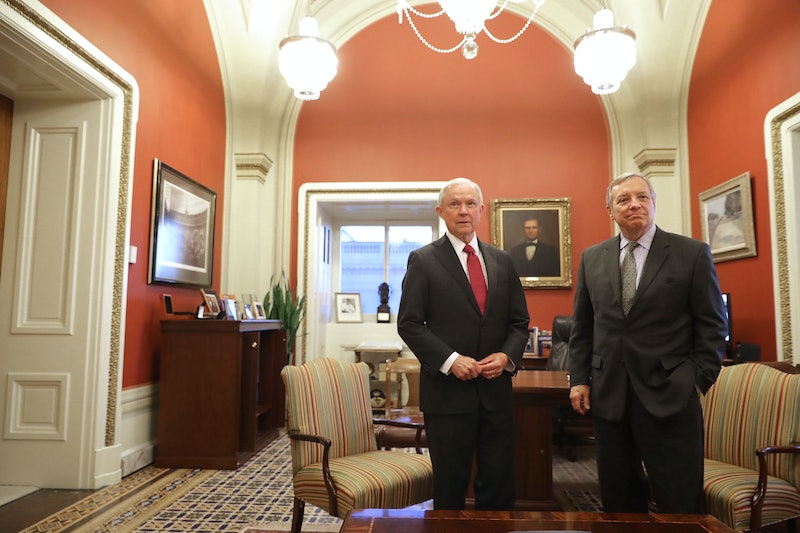 On Tuesday morning, attorney general nominee Senator Jeff Sessions (R-AL) took the first step in the process of assembling the executive branch under incoming President Donald Trump, as he faced the first confirmation hearing for a Cabinet official. Having already been named by Democrats as one of the eight Cabinet nominees they intend to fight, Sessions faced tough questions from Democrats about his record on issues of of civil rights, as well as protests. But Sessions' hearing is just the beginning.

Tuesday afternoon at 3:30, General John Kelly will begin the second set of confirmation hearings for his position as secretary of Homeland Security. Unlike with Sessions, Democrats have not raised significant objections to Kelly's nomination, though the hearings will undoubtedly be a flashpoint for controversy, due to the divisions over Donald Trump's hardline positions on immigration.

Wednesday, January 11 was supposed to be an extremely busy day for Senate confirmations, with Republicans scheduling four high-profile hearings to begin in addition to the second rounds for Sessions and Kelly (and the first Trump press conference since August). Opposition to the schedule from Democrats led to the hearings for secretary of Education nominee Betsy DeVos and CIA director Mike Pompeo being delayed to January 17 and 12, respectively. But there are still two important hearings that day: Exxon CEO Rex Tillerson, nominated for secretary of State and facing hearings at 9 a.m., and former Labor Secretary Elaine Chao, nominated for secretary of Transportation, who begins hearings at 10:15 a.m. Tillerson is another nominee whom Democrats have targeted, and he may find a difficult time getting confirmed due to objections from Republicans as well over his perceived closeness to Vladimir Putin's regime in Russia.

Thursday, January 12 is busy, though, with four nominee hearings: secretary of Defense nominee General James Mattis at 9:30, Housing and Urban Development nominee Ben Carson at 10, Commerce secretary nominee Wilbur Ross at 10, and Mike Pompeo's replacement hearing at a yet-to-be-determined time. Though none of these nominees have been targeted by Democrats, there could likely be questions about Gen. Mattis' need of a waiver allowing a recent former general to run the Pentagon, retired neurosurgeon Carson's lack of any relevant experience to housing issues, Goldman Sachs CEO Ross' potential conflicts with the financial industry, and Pompeo's feelings on findings by the CIA related to alleged Russian hacking of Democratic operatives.

The following week holds hearings for three potentially controversial nominees which do not yet have official times, including Labor nominee Andy Puzder, Health and Human Services nominee Tom Price, and the rescheduled hearing for Education nominee Betsy DeVos. All three have been targeted by Democrats — Puzder for his history of advocating for lower worker protections as CEO of Hardee's and Carl's Jr., Price for his desire to repeal the Affordable Care Act and his previous statements in favor of privatizing Medicare, and DeVos for her lack of direct experience in public education and desire to phase out federal funding for public schools in favor of school vouchers.

There are still numerous top cabinet officials whose hearings have not yet been scheduled, like those of Treasury secretary nominee Steve Mnuchin, Scott Pruitt, who has been nominated to run the Environmental Protection Agency, and Office of Management and Budget nominee Mick Mulvaney. The next few weeks (like much of the next few years) will be eventful.