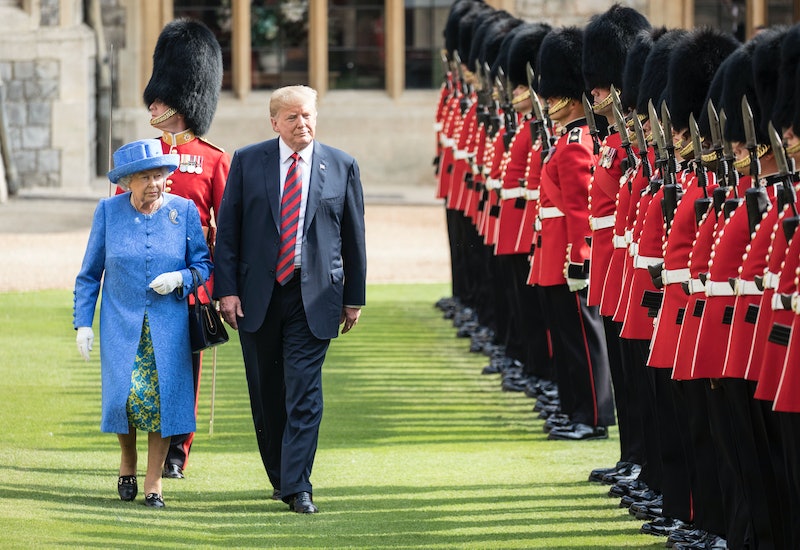 President Donald Trump made his first working visit to the United Kingdom in June of 2018, where his royal etiquette faux pas took center stage over any substance of his meeting with Queen Elizabeth II. Now, the president has accepted an invitation for a formal state visit to meet with the Queen and Prime Minister Theresa May, so he'll have another chance to make a good impression on the beloved monarch. If you're wondering when Trump is meeting Queen Elizabeth again, don't start holding your breath quite yet — the date is confirmed, but it's set for early June.

Buckingham Palace announced the visit on Tuesday in a statement, writing that Trump and First Lady Melania Trump had accepted an invitation for a state visit scheduled for June 3-5. The couple will combine this visit with a trip to France the next day, where they will commemorate the D-Day invasion with French President Emmanuel Macron, according to The New York Times.

A White House statement said that the visit would help "reaffirm the steadfast and special relationship" between the United States and the United Kingdom, per Politico. May also called the meeting an "opportunity to strengthen our already close relationship in areas such as trade, investment, security and defense, and to discuss how we can build on these ties in the years ahead,” according to The New York Times.

When Trump visited before, it wasn't on an official state visit, which The New York Times described as an honor that the queen doesn't extend to just anyone. Before this visit, only President George W. Bush and President Barack Obama had received a similar invitation, according to the Buckingham Palace statement. Trump's previous visit was officially termed a working visit, after the United Kingdom invited him for a state visit initially and the two sides then quarreled about numerous small issues that eventually prevented it from happening, as The New York Times wrote.

However, the most memorable aspects of Trump's visit for many were the moments in which he ignored the rules of royal etiquette in his meeting with the queen.

His faux pas included making the queen wait for him, as Vice News wrote; not bowing when he first met her; and walking in front of the queen, all of which appalled people on Twitter. The queen did not react to any of these potential snubs, according to The New York Times. Trump later commented about the issue of tardiness — except despite the video footage showing Queen Elizabeth waiting and even checking her watch, Trump claimed that he and Melania were the ones waiting for 15 minutes.

"So, here was the story by the fake news," Trump said at an August rally, as Politico wrote at the time. "'The president was 15 minutes late for the queen.'"

After these remarks, numerous users lashed out at him on Twitter, often citing the video proving that his statement was false.

"Does he know the event was televised live and he left a 92 year old woman standing in the heat?" one Twitter user wrote.

In June, then, Trump will have another opportunity to present himself to the British people and put these moments behind him.