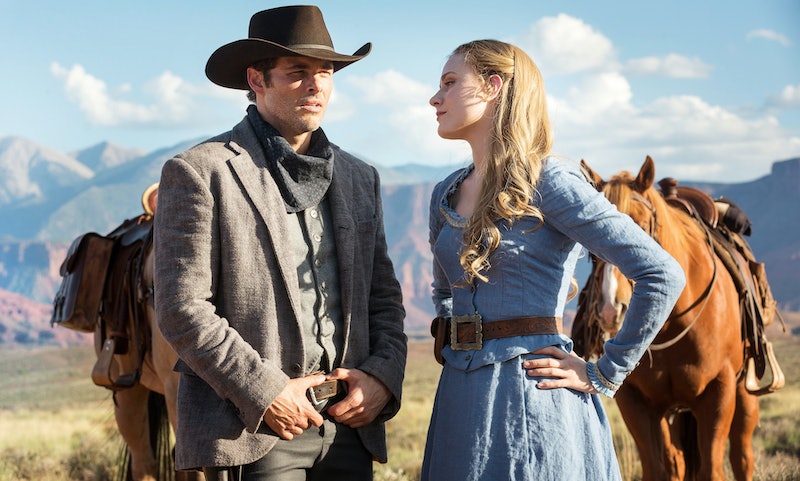 If you thought a Wild West theme park run by evil robots was a ridiculous setting and premise for a TV show, you were right. But ridiculous in the absolute best way possible. Ever since its debut in 2016, Westworld has provided some of the most gripping and outrageous action that TV's seen in years. So, now that a third series has been announced, you can bet that the hype has been getting real loud real quick. But it's at this point that you must be wondering: when will Westworld season three be out in the UK? The cowboy robots are coming out to play once again, and you won't wanna miss out.

The official Twitter page for Westworld confirmed midway through the airing of season two that the show would be back for a third, as they tweeted a cryptic clip with the text: "Initiate season 3" and "2020." While they posted that back on May 1, 2018, a trailer has only just emerged — over a year later.

HBO uploaded the trailer — which just so happens to star Breaking Bad's Aaron Paul — onto YouTube on Sunday, May 19. While the trailer reaffirms that Westworld will return to screens in 2020, it doesn't specify an exact date.

However, the Express wrote on Sept. 14, 2018 that they reckon the show would roll back around sometime in April, 2020, owing to the fact that the previous serious had premiered that month. But don't pin all of your hopes there — this is purely speculation so far. However, what does still seem like a sure thing — according to the Express — is that Westworld's season three premiere will be simulcast on Sky in the UK while it plays on HBO in the US, just as it always has been.

Bustle reached out to reps at HBO and at Sky to see if any specific dates have been confirmed, and to ask if the show will be simulcast across the two networks. A rep from Sky got back to say "at present we do not have any details available on the UK release date for Westworld S3." HBO's rep echoed those sentiments: "Westworld will return in 2020. There are no additional details at this time." I will let you know when that changes.

But why is it taking the show so long to announce that release date? Well, to be fair, Westworld's co-creator Jonathan Nolan did warn Entertainment Weekly readers back on June 24, 2018 that there was "going to be a bit of a wait for a third season." He said that was down to many things:

“We’re still talking it through, honestly, with our friends at HBO, and with the cast and the crew. We want to take the time to make every season as exciting as possible. And we have an enormous challenge going into season 3 with the worlds that we’re building going forward. We want to make sure we have the time to do that right,” Nolan said.

In an interview with the Hollywood Reporter from Aug. 14, 2018, Nolan caused a bit of stir when he said that season three would see a "radical shift" for the show. He gave some little hints when he said that "[t]he Hosts have a different version of mortality, a different outlook. I think clearly with Dolores, as she's laid out, there is a longer view here, a larger set of goals. They're existential. They span eons. And that's a fascinating level of story to engage in."