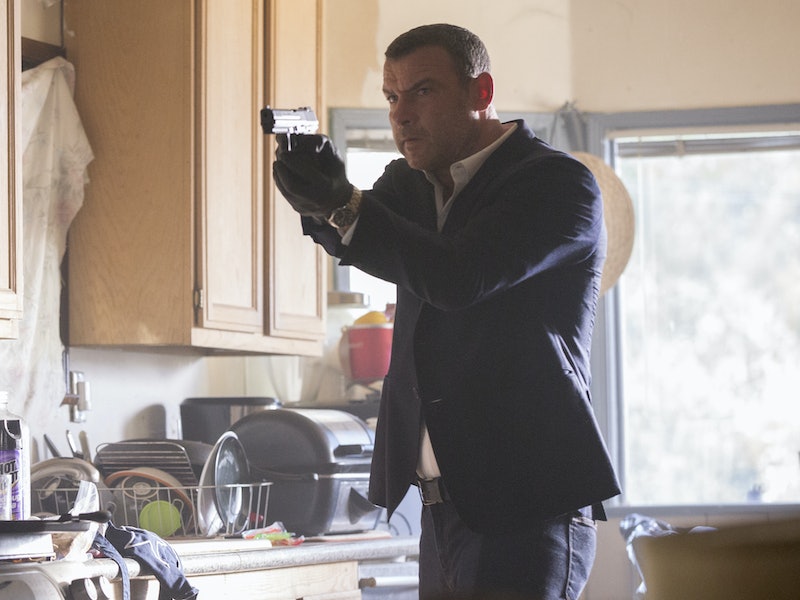 There's nothing better than learning that your favorite show has just been renewed for another season. You get a whole new year filled with fan theories and exciting cliffhangers and the incredible feeling of watching the first new episode after a long draught. So fans of Hollywood's most fearsome fixer will be delighted to know that Ray Donovan has been renewed for a sixth season, per Entertainment Weekly. But exactly when is the premiere of Season 6 of Ray Donovan?

Fans of the show might be in for a bit of a wait, but don't worry, it won't be too long. TV Guide reports that Season 6 of the popular Showtime drama will begin production in early 2018, and the season will air later that year. And since there is only one episode left in Season 5, fans will have to wait about a year for the next installment in the turbulent life of Ray Donovan.

But the show's renewal is not the only exciting news released this week about Ray Donovan. It was also announced that the show, which has spent five seasons in Los Angeles, will be moving to New York City for it's sixth season. In a statement about the decision per Variety, showrunner David Holland shared:

"For our show, creatively, New York is exciting. Fashion, media, finance, theatre, culture. It’s going to present new challenges for Ray Donovan which mean new opportunities for us as dramatists. Ray came to Los Angeles to build a life for himself and his family. They’re not there anymore. Ray’s career has changed and he is looking for a place to rebuild his life. Ray thinks he went to New York to help his daughter. He’s going to find out he’s there to help himself."

The decision to move the show to New York will also have an impact on the way the show looks and feels. While some of the most iconic shots in the show feature Ray driving around LA while talking on the phone, the titular character might have a much harder time doing that in the city that never sleeps. In an interview with TVLine, Hollander revealed that there might be some significant differences between Season 6 and the rest of the show:

"There are going to be a lot of changes. The silhouette of Ray Donovan will, in many ways, remain untouched. But there’s also an opportunity to have him inhabit the city in a way [that regular New Yorkers] truly inhabit it. He surely won’t be whipping around Manhattan in a Mercedes. I’m sure he’ll be much more on foot, and much more outside of the city, too."

Having Ray Donovan hit the Big Apple was partially motivated by the desire to have Donovan attempt to clear things up with his daughter, Bridget, but it is also the result of profound loss. Much of Season 5 saw Ray dealing with the grief that followed the death of his wife, Abby. By moving to New York, Ray will be leaving that past behind, and cutting out a new path and new life for himself.

Gary Levine, president of programming for Showtime, praised the show's portrayal of this grief in an interview with Variety:

"Ray Donovan broke new ground this season with its deeply emotional and innovative approach to Abby’s passing, without sacrificing any of the intensity that has been its trademark. We so appreciate that David Hollander is never satisfied with the status quo, and his creative plan for moving the show to New York reflects his relentless ambition for this series."

The show will definitely be continuing to break new ground with the move to New York, and fans have not only a new season of Ray Donovan to look forward to, but a whole new location as well.