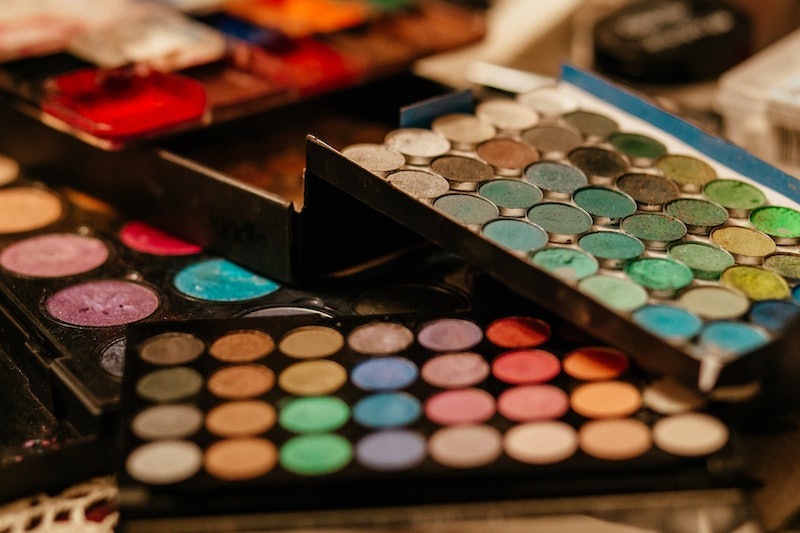 Be honest. Who among us hasn't watched an episode or 12 of RuPaul's Drag Race and eyeballed our makeup kits from across the room, wondering if we could ever come close to reaching such fabulous heights? If this baby drag queen's photoshoot is any indication, not even children are immune to the show's charm. With some help from his mother and a bunch of eyeshadow, this little boy managed a transformation that RuPaul would be proud of. Readers, prepare to be slayed.

On Tuesday, Mikli Feria Jorge tweeted that she and her young son were watching RuPaul's Drag Race when he was struck by inspiration. "This little one was, 'I want to do that also!'" Jorge explained in her post. Rather than patting her son on the head and telling him makeup is for girls, Jorge busted out her eyeshadow palette, and together, the mother-son duo went to town.

Her son did much of the work, filling in his eyebrows and adding dashes of color where he saw fit: his eyelids, cheeks, and even a little forehead action. Clearly, this kid is a natural. Finally, he turned to his mother to add wings, lipstick, and of course, false eyelashes.

When she complimented her son, she tweeted that he told her, "Ma, we need to buy a wig." Like any drag queen, he also came up with a name for his alter ego — may I introduce Ballooni Liteg?

Meanwhile, his mother was doing her own makeup, and he had a name for her transformation, too: Cat Astrfi. Please excuse me while I melt into a puddle of happy goo.

Jorge posted the results of their impromptu photoshoot on Twitter to widespread acclaim. The initial tweet has nearly 45,000 likes, and many users applauded her for allowing her son to play with makeup. Even today, gender norms are strictly enforced in children. Makeup and playing house are for girls; toy trucks and collecting bugs are for boys. As Jorge's tweets demonstrate, though, things are slowly changing, and it's important to recognize open-minded, supportive parenting when it happens.

Of course, the reaction hasn't been wholly supportive. Plenty of trolls have emerged from their Internet caves to rebuke Jorge for... well, I'm not sure. Teaching her son to follow his interests? It's worth noting that while tomboys are seen as totally normal, boys are taught to quell any feminine interests or characteristics. What does that say about how women are treated in society?

But I digress. Jorge and her son get a stamp of approval from this particular (unofficial) judge.

More like this
The 19 Best Tweets & Memes About Bisexual Awareness Week
By Lexi Inks
Why TikTok Is Obsessed With Caesar Salads Right Now
By Alexis Morillo
Behind The Hilarity Of The "POV: You Walk Into My Room" TikTok Trend
By Lexi Inks
Why TikTok Is Flooded With Controversial Videos About "Pick Me Girls"
By Courtney Young
Get Even More From Bustle — Sign Up For The Newsletter