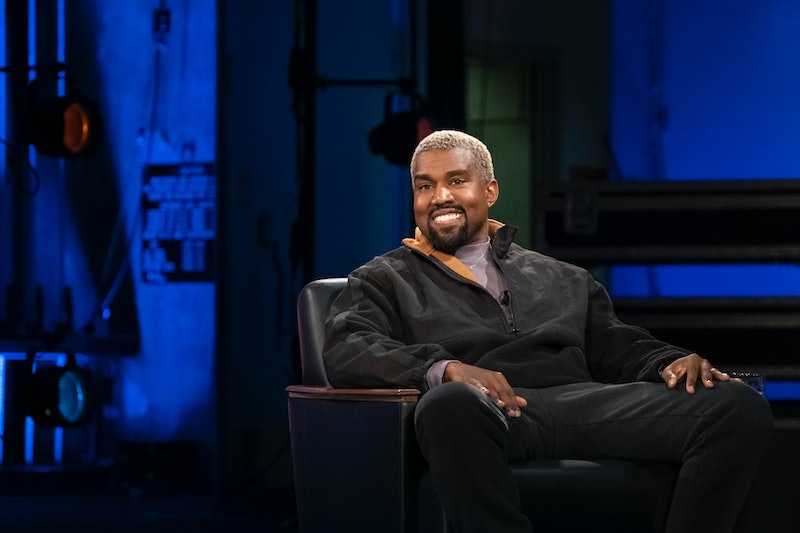 When David Letterman's interview series My Next Guest Needs No Introduction debuted last year, he interviewed President Barack Obama in the season's first episode as he, more than any other guest that season, truly did not need an introduction. To top that, Letterman kicks off Season 2 with someone who might need even less of an introduction: Kanye West. 2019 hasn't been the most eventful year for the musician and designer, but when Kanye's Letterman interview was filmed he was just coming off of an eventful 2018 and had just begun to work on the project that would define the first half of 2019 for West, his Sunday Service.

So far, West is having a relatively low-key 2019 — but after last year, every other year of his life might look calm. In case you were offline or something, West produced and released five albums with other artists over the course of the summer, got caught up in beef with Drake, and walked into the TMZ offices to declare that slavery was a "choice." Kanye set the bar pretty high for himself, while also prompting a lot of questions from fans, including Letterman. SO it makes sense to wonder when he sat in the hot seat with him and what his state of mind was like.

Consequence Of Sound reports that the Sunday Service that was filmed for My Next Guest Needs No Introduction occurred in January of 2019, just a couple of weeks after what may have been Kanye West's last day on Twitter.

Kanye's Twitter account had spent some time dormant after being deactivated in May of 2017, before being reactivated on April 13 2018. It seems, however, that West has taken yet another break from Twitter as he has not updated his feed since January 1, despite his declaration the night prior that "Tweeting is legal and also therapeutic." His tweets from the first day of 2019 celebrated his choice to don a MAGA cap, saying "One of my favorite of many things about what the Trump hat represents to me is that people can’t tell me what to do because I’m black." The he claimed that he supported "Trump all day".

Letterman didn't probe too deeply into West's well-publicized support of the controversial president and may not have had West not brought it up himself. Their conversation also turned to matters of #MeToo, the healing power of light and music, and West's memories of his own mother. This interview is the most high-profile look into West's mind during a year that has been light on interviews, tweets, or surprise appearances at the TMZ offices.

While this interview gives curious minds a look into West's state of mind at the beginning of the year, anyone curious to see if 2019 has changed him at all may be disappointed. The interview doesn't cover events past January, including any of the revelations from the investigation into Trump — who Kanye did not vote for, as he claims to have not voted for anyone — or Kanye's momentous Sunday Service at Coachella.

While Kanye's Letterman interview provides some insight into his 2018, fans may have to wait a bit longer to understand what's happening with Kanye in 2019.