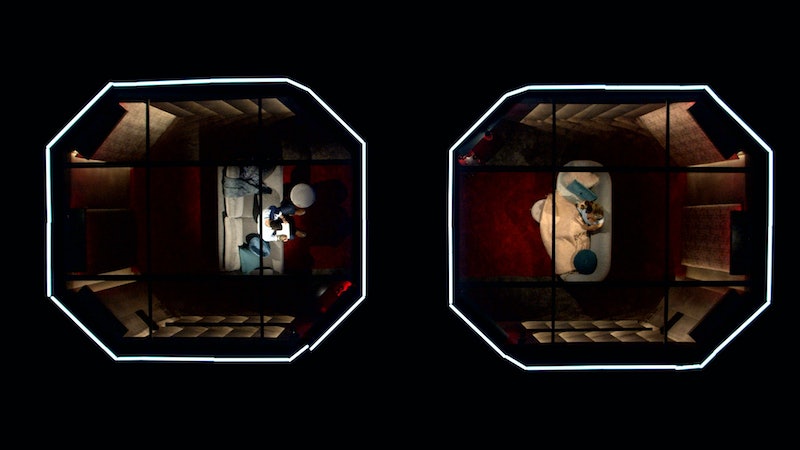 "Here, you will choose someone to marry," Nick Lachey announces to a group of singles at the beginning of Netflix's Love is Blind. He pauses for dramatic effect. "Without ever seeing them."

In a single sentence, Lachey — who co-hosts the series with his wife Vanessa — efficiently summarizes the bonkers premise of the new dating show, which is the latest in a stream of bonkers dating shows from the same production company that gifted us 10 seasons of Married at First Sight. On Love is Blind, straight men and women go "blind" speed-dating — which means they have days of long conversations from separate sides of an opaque screen — before deciding who they want to marry. The real tension comes from the ticking clock in the lower left-hand corner of the screen, which lets us know from day one that there are only 38 days until they walk down the aisle...if they last that long, anyway.

The show, which premieres Feb. 13, was actually filmed all the way back in the fall of 2018, which means that any couple that survived this weird experiment can celebrate their second Valentine's Day together by watching spliced footage of their first dates.

In reality, love only needs to be blind for the first week, after which those who get engaged are able to meet their partners face-to-face for the first time. That leaves four weeks on the clock to move in, meet each other's families, and try out their relationships far removed from the Black Mirror-like TV set they met and fell in love on — though still under the surveillance of TV cameras. If a couple survives the transition from the Atlanta pod-dating facility to the actual real world, a wedding happens. Whether or not they end up saying "I do," we'll have to wait and see.

More like this
‘The Ultimatum: Queer Love’ Is Officially On The Way
By Radhika Menon and Kadin Burnett
Here’s When You Can Expect More ‘Indian Matchmaking’
By Brad Witter
Here’s When 'Love Is Blind: After The Altar' Was Filmed, Because It’s Hard To Keep Track
By Grace Wehniainen
Kyle & Deepti Finally Revealed Their Relationship Status Post-'After The Altar'
By Grace Wehniainen
Get Even More From Bustle — Sign Up For The Newsletter