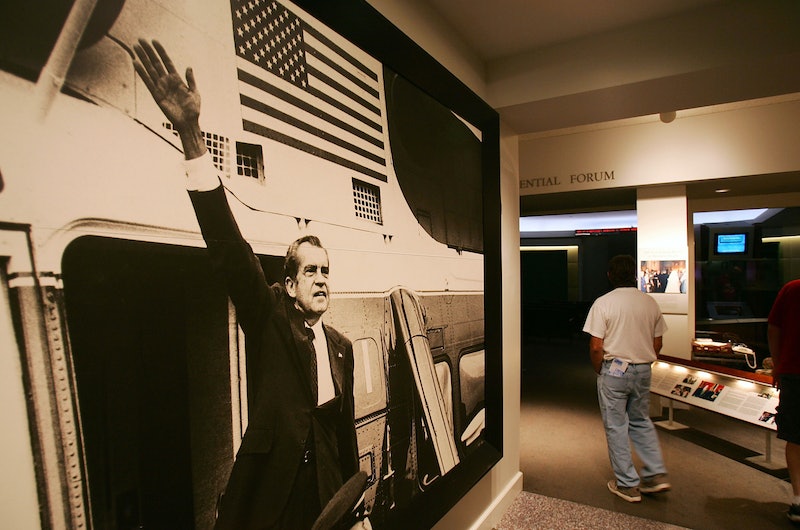 On Monday evening, President Donald Trump fired acting Attorney General Sally Yates after she refused to comply with his executive orders on immigration and refugees. If you're thinking that Trump's most recent controversial move seems out of the ordinary, and even unprecedented, you're not wrong. Though there have been several instances of attorneys general resigning, it's quite rare for a president to actually fire one. Richard Nixon's turbulent presidency, in this case, should ring a bell.

In fact, some Twitter users are comparing Trump's own dismissal of Yates over the immigration and refugee order to Nixon's "Saturday Night Massacre," a scenario during the Watergate crisis. In 1973, Nixon ordered then-Attorney General Eliot Richardson to fire special prosecutor Archibald Cox, who was assigned a significant role in the Watergate investigation that ultimately led to Nixon's resignation.

Richardson resigned after refusing to fire Cox. Not long after, Deputy Attorney General William Ruckelshaus took over as the new acting AG, and when he refused the same action, he wasn't given the option to resign. Instead, Nixon fired him and found someone who would carry out his order to dismiss Cox, Solicitor General-turned-acting AG Robert Bork. Now, it seems as though new acting Attorney General Dana Boente will side with Trump on his immigration order.

"I am honored to serve President Trump in this role until Senator Sessions is confirmed," Boente said on Monday evening. "I will defend and enforce the laws of our country to ensure that our people and our nation are protected."

Though Nixon's Saturday Night Massacre is perhaps the most concerning incident of a president actually firing an attorney general in recent history, some attorneys general have chosen to resign under special circumstances. On Aug. 27, 2007, just two years after being appointed by former President George W. Bush, Alberto Gonzales resigned as attorney general, expressing that he believed it would be "in the best interests of the department."

Ultimately, he stepped down after coming under intense criticism for firing nine U.S. attorneys in 2006 — the decision to fire several members of the Department of Justice on Dec. 7 that year led some to even call it the Pearl Harbor Day Massacre. Though Gonzales claimed he had fired them due to alleged performance issues, other Democrats alleged it was for political reasons. But Bush's position in the scenario was much different than that of Trump. In fact, Gonzales' resignation was not encouraged by former President Bush at the time. Instead, Bush actually expressed regret at hearing the news, but accepted the resignation nevertheless. Still, the so-called "purge" of the Justice Department at the time offers some similarities.

Needless to say, it's been a long time since something as significant as the dismissal of an attorney general has happened on the president's watch. And it won't be forgotten anytime soon.