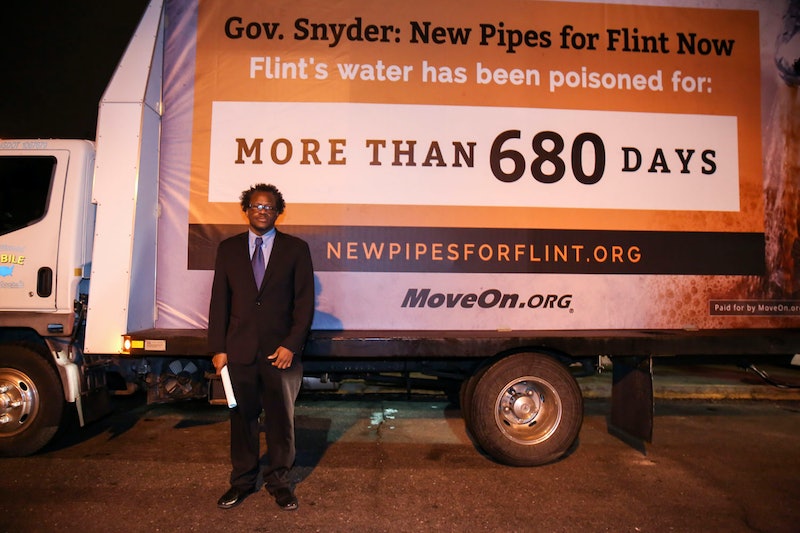 As President Donald Trump begins his four-year term, media coverage has naturally shifted to focus on his cabinet appointees and executive orders. Considering his willingness to act on controversial issues — rolling back Obamacare, reinstating construction of the Keystone and Dakota Access pipelines, ordering the building of his promised border wall, among others — it's understandable that headlines are featuring these new and newsworthy developments. However, that does not mean Americans can or should forget about the Flint water crisis. Yes, it's still ongoing, and yes, it's still totally unacceptable that fellow citizens have undrinkable tap water in the wealthiest country in the world.

Flint's water crisis began over two years ago, when residents began complaining about the smell and taste of tap water. The city had recently switched its main water supplier, from the Detroit Water and Sewage Department to the Flint river. Over the next year, officials at Michigan's Department of Environmental Quality (MDEQ) would aggressively defend the quality of Flint water, ignoring or denying outside studies that indicated alarming levels of lead in local residents' home water supply. In the meantime, General Motors stopped using Flint water, and dangerous blood lead levels in children rose, at 4 percent of children tested, up from 2 percent prior to the water switch.

On Dec. 29, 2015, two MDEQ officials resigned, as the Flint water crisis was declared a state of emergency by the city's mayor, Karen Weaver. Two weeks later, Gov. Rick Snyder and President Obama also declared a state of emergency, and the House Committee on Oversight and Government Reform begins to hear testimony. Gov. Snyder stated, "Let me be blunt: This was a failure of government at all levels. Local, state and federal officials — we all failed the families of Flint."

Nearly a year after this confession of failure, Gov. Snyder remains in office, and the people of Flint remain stuck with unsafe water.

As of July, nine individuals have been criminally charged for their role in the Flint water crisis. Additionally, two corporations are also being sued. And that is an encouraging development, given that it looked for a while like no one would be held accountable for the devastating harm done to Flint residents' health.

Most egregious is the harm done to children. Even small amounts of lead exposure are incredibly damaging to the developing brains of young children. As Abby Goodnough at The New York Times reports, "Studies have linked elevated lead levels in blood to learning disabilities, problems with attention and fine motor coordination, and even violent behavior."

For some, there is a racial component to the neglect and nonchalance that have defined the government attitude towards Flint. An economically struggling city, Flint's 99,000 residents are 57 percent black. And there is a definite belief among many that no predominantly white city would have to wait nearly three years (and counting) for drinkable tap water. LeRon Barton argues that this is what 21st century racism looks like: a predominantly black city ignored by all levels of government, suffering the devastating consequences of negligence.

Another major concern is what education will comprise going forward. If a substantial number of children in Flint begin showing signs of lead poisoning, that will have a tremendous impact on their academic ability and needs. Superintendent of Flint's school system, Bilal Tawwab, noted that a single nurse is currently responsible for caring for the district's 5,400 students. Clearly, funds are extremely limited, and an uptick in students with special needs would require extra staff — a hefty expense for a school system already struggling.

Certain things are taken for granted in America. Clean tap water is one of them. The human suffering in Flint can neither be ignored nor forgotten, no matter how extraordinary the words and actions of the new president. Until every resident has safe water, and until every guarantee is made that children impacted by lead poisoning will be taken care of, no American should let their representatives or President Trump dismiss the Flint water crisis.