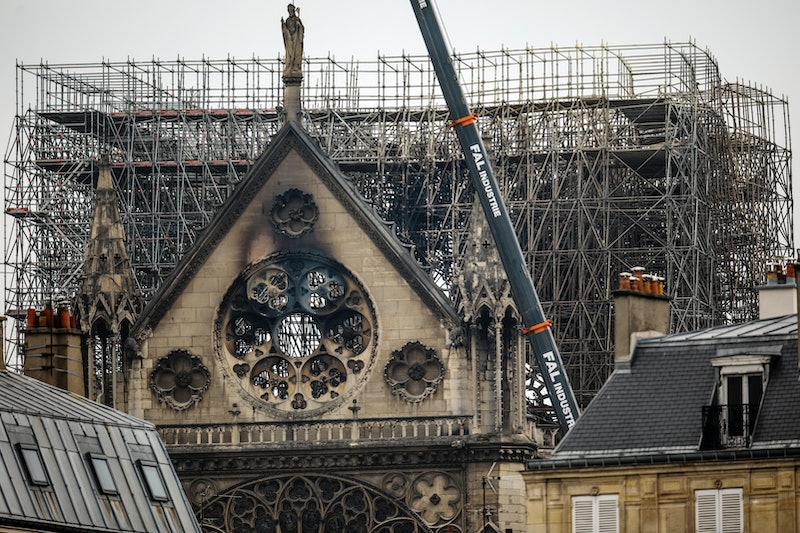 On Monday, one of Paris' most famous landmarks suffered a devastating fire that caused major damage. Though French President Emmanuel Macron hasn't specified when the Notre Dame Cathedral will reopen, there's still hope that you will be able to visit one day down the line. Macron gave a televised address on Tuesday that included a rough timeline for repairs.

“We will rebuild Notre Dame even more beautifully and I want it to be completed in five years, we can do it,” Macron said, according to Reuters. “It is up to us to convert this disaster into an opportunity to come together, having deeply reflected on what we have been and what we have to be and become better than we are. It is up to us to find the thread of our national project.”

The Notre Dame Cathedral, which took over a century to build and has been standing since the middle ages, was engulfed in flames on Monday. Firefighters arrived within a half hour of the fire starting, according to ABC News, and although they were able to salvage much of the building and around 80% of the artifacts contained therein, the roof of the structure was completely destroyed.

According to the New York Times, investigators are tentatively treating the fire as an accident, not an act of deliberate arson. Although a specific cause hasn't yet been identified, several factors may have led to the fire becoming as big as it did, Vox and the Times report.

The building is largely buttressed by timber, which is of course highly flammable, and the fire was so high up that hoses from the ground couldn't reach it, civil engineering professor Thomas Gernay told Vox. In addition, the Times reports that the cathedral didn't have an automatic sprinkler system in its roof's framework, and that the fire was only located after the second fire alarm, which went off 23 minutes after the first.

According to CNN, the three richest families in France have stepped in to help with the reconstruction effort. The Arnault, Bettencourt Meyers, and Pinault families have collectively pledged $565 million to cover the cost rebuilding of Notre Dame cathedral, CNN reports. In total, the reconstruction fund has raised $845 in pledged donations, according to Reuters.

In his address Tuesday, Macron said that the fire presented France, which has been experiencing significant domestic turmoil recently as a result of the yellow jacket protests, with a chance to unite and work together toward a common goal.

"I truly believe that it is up to us to transform this disaster into an opportunity to come together, having deeply reflected on what we have been, what we have to be and becoming better than we are," Macron said, according to Reuters. "It is up to us to find the thread of our national project that made us, that unites us, a human project."

Not everybody's timeline for reconstructing the cathedral is as optimistic as Macron's, however. Eric Fischer, whose foundation is leading the effort, told AFP that he believes it will take "decades" to fully restore the building to its pre-fire state.