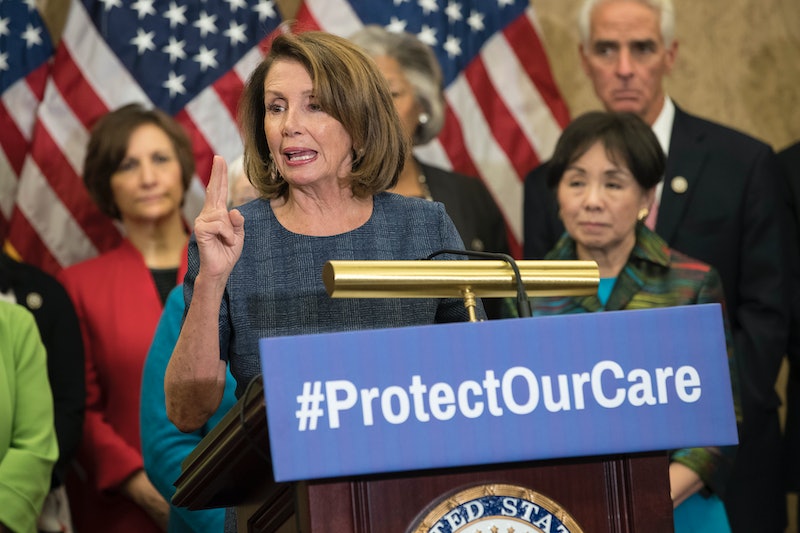 The legislation that has protected Americans with pre-existing conditions from health care companies that threaten to abandon them, made sure all children are guaranteed to have the chance to see a doctor, and that brought healthcare to more than 15 million Americans who didn't have the basic human benefit before, is slowly being dismantled by Republicans. So when will Obamacare be repealed?

With a majority in both the House and Senate, Republicans are making it their first priority to get rid of the Affordable Care Act. It's been in the Republican craw since 2010 when President Obama first signed the bill into law, and now, in controlling both chambers and with a president who's all for getting rid of the landmark measure, they're flexing their legislative muscles, taking it apart, bit-by-bit, without any sort of solid replacement plan to fall back on.

Early Thursday, the Senate finalized the first step toward a repeal with a 51-48 simple majority vote — the bare minimum for the bill to move on to the House.

And the President-elect wasted no time to celebrate this rights-stripping move:

Now, at a whirlwind pace, just a day later, on Friday the House matched that vote, with numbers that fell almost directly down party lines, passing the measure with a 227 - 198 majority. The effort to repeal has been able to move so swiftly through Congress by using a loophole of sorts, known as "budgetary reconciliation."

Dems like Elizabeth Warren have been protesting the possibilities of such an event, warning:

For eight years, Republicans have complained about health care in America ... they have blamed everything in the world on President Obama. They’ve hung out on the sidelines, name-calling, making doomsday predictions, and cheering ... what’s the first thing on the Republican agenda now that they are in control? The first thing: massively raise the costs of health insurance for everyone who has it. The first thing: create chaos for hospitals, clinics, and insurance. The first thing: abandon the people they were elected to represent. The first thing: repeal and run away ... and they are shocked—shocked—to discover that guaranteeing Americans access to health care is a complex business and they don’t have any good ideas.

You can watch the video of her no-nonsense speech here:

After decades of work towards the possibility of healthcare for all, the life-saving legislation is looking like it will be toppled in a relative instant and many will have no choice but to get stuck with the Republican plan: "Don't get sick. And if you do get sick — die quickly."

More like this
Romance Authors Are Mobilizing For Reproductive Rights
By Natalia Perez-Gonzalez
New Coins Unveiled As King Charles III's Reign Gets Underway
By Sam Ramsden
How To Decide Between HIIT & LISS Workouts
By Carolyn Steber
I Tried The Air Up Water Bottle, Which Flavors Your Drink With Scents
By Carolyn Steber
Get Even More From Bustle — Sign Up For The Newsletter