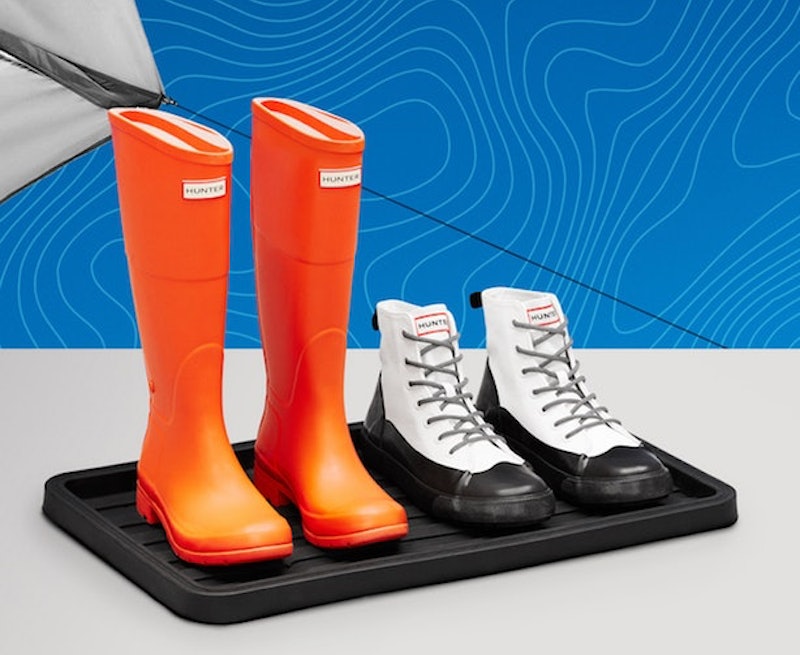 The Hunter x Target launch has come and gone, and there's one item that didn't show up to the party. According to an official press release, the Hunter for Target won't include those women's tall boots that everyone wanted — but it's for a good reason.

"We’ve decided not to make this item available," Target said in a press release. "We’re very sorry, but the production simply didn’t meet our standards, Hunter’s standards, or the standards we want guests to have when they shop at Target. We are working with a third party to recycle the boots."

People were instantly excited when they heard about the Hunter x Target collab. The line was announced as including everything from ankle boots and camping gear to backpack and jackets. While all of those items hit the in-store and virtual shelves, the brand's signature tall boots were missing from the launch.

Instead of taking the boots back and reproducing them, a representative for Target tells Bustle in a phone interview that it has decided to recycle the footwear instead. The brand confirms to Bustle that the shoes will not be available at Target in the future, and that they are working with a third party to correlate a recycling plan. The brand declined to comment on specifics with the production issues.

"To guests who were hoping to purchase these boots, and to our partners at Hunter who support Target’s decision, thank you for your patience and, once more, we’re sorry we let you down. We promise to do better next time," the Target press release reads.

Reps of the brand tell Bustle that they do not plan to release these boots, because it was a limited edition launch. Unfortunately, because the boot was a unique collaboration with the brand, there's no way to get them to the store in time, since this is the first and final drop of items.

While the collaboration is comprised of 300 different items, the boots not being released hits soft spot for fans. The rain boot is a signature item from Hunter, and this particular one was made of 28 different styles of boots already available by Hunter, according to Target. The brand customized the shoe to make it as affordable as possible.

The tall boot was specific to Target and will not be sold anywhere else. The footwear also happened to be one of the most affordable versions of the boot, ringing in at $40. Along with the boots, all other items were designed specifically for the brand too.

The tall boots are available in the men's style though. Target did not comment on why the men's boots were made successfully, while the women's boots were never released. You're also still able to shop all of the other footwear, including the ankle boots and slides on the Target website right now. The brand assured anyone who might have purchased these boots can take them back to a Target store and be refunded.

According to Twitter reactions, some of the tall boots did get put on the shelves before they got pulled. Some people took them to the register only to find out that the boots were being recalled. A select few people purchased the boots before the announcement went out. One pair is already being sold on eBay for $68.95.

There are still almost 299 other incredible items to purchase from the collab. While this is a sad day for rain boot lovers, it gives you the opportunity to branch out and see what else Hunter has to offer. You'll just need to save up for those rain boots after all.