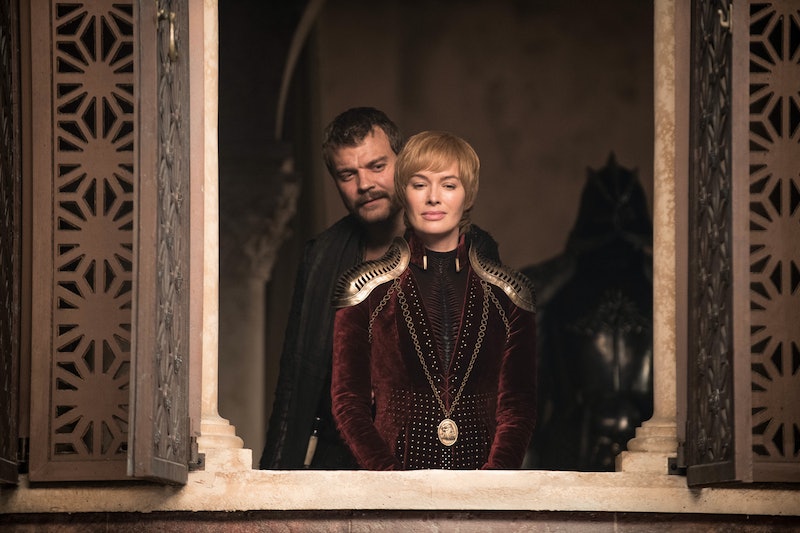 By now you've probably seen 100 Game of Thrones memes about Cersei and her elephants (or lack thereof). Basically "where are my elephants?!" is the new "where are my dragons?!" But seriously, where are the Golden Company's elephants on Game of Thrones? As Cersei was informed, they couldn't make the journey to King's Landing on the boats because they don't travel particularly well.

That's why the elephants are likely back where they've always been — in Essos, where the Golden Company soldiers are housed when they're not being purchased for various war efforts. Cersei had originally sent Euron Greyjoy to Essos with her Braavos bank loan to buy the Golden Company (and its soldiers, horses, and elephants) for the impending war with Daenerys and her dragons. And there's a clue in the books as to why Cersei wanted those elephants so badly.

In the Winds of Winter sample chapter, Golden Company member Lysono Maar acknowledged that "the dragon is mightier than the elephant," but that elephants had the advantage of being real. "On the battlefield, give me elephants I can see and touch and send against my foes, not dragons made of words and wishes," Maar said.

Now, Dany's dragons are very real — but Cersei has not actually seen them. She's only heard of them from others. Perhaps she wanted to go the realistic route with the elephants because at least she knew she could count on those. Only now, of course, she can't. But even without the elephants, Cersei's army is in great shape. In the books, there are only 10,000 men in the Golden Company. The TV show has upped that number to 20,000, along with 2,000 horses. (apparently horses travel better from Essos than elephants do.)

According to Vulture, in the books, the Golden Company actually does bring elephants to Westeros from Essos. And the elephants are certainly worth bragging about for the army. When a solider lists all the army's assets, he says that they have 500 knights, 1500 horses, 500 squires, 1000 bows and... "elephants. We must not forget the elephants." The company has 24 of those.

As Vulture noted, in the books, when the Golden Company army is sailing to Westeros, half of the ships get blown off course. But Winds of Winter confirmed that some of the elephants did make it to land. Cersei probably wishes that particular book plot had been transferred over to the show so she could have her elephants.

As much as Cersei "wanted those elephants," though, they weren't suited for the journey — aka the show probably didn't have a high enough special effects budget, what with the dragons, direwolves, wights, and white walkers to animate. Adding digital war elephants to that would be a lot.

So, the elephants are probably just chilling in Essos and being used for their usual duties of carrying people and goods around, since there aren't any active battles for them right now. It's not a bad life for a war elephant.