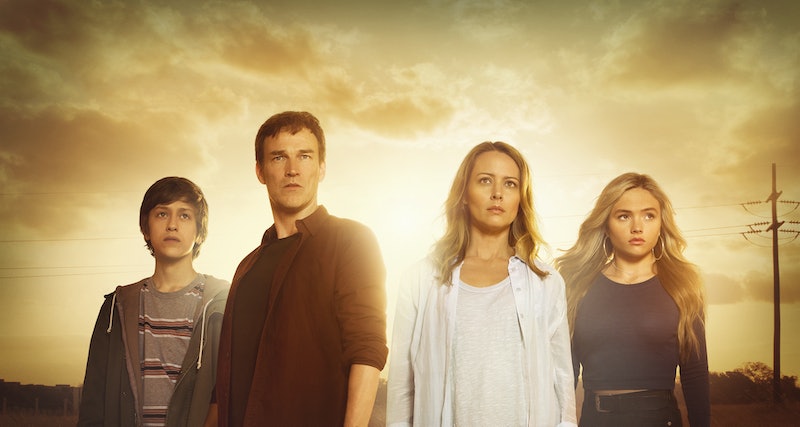 Though it definitely exists in a universe that's been affected by a rise of mutated humans, the X-Men aren't active during The Gifted. Something must have happened to have either wiped the heroes out or sent them into hiding, but the show may not be so quick to provide reasons for their absence.

In this new series, simply being a mutant and not submitting to a genetic test by the government is enough to warrant arrest. There is even a new agency, an offshoot of the U.S. Department of Defense, called the Sentinel Services. And, as a sneak peek video for the series shows, the Sentinel Services are not afraid to use lethal tactics if they feel it necessary, deploying guns as well as spider-like robot creatures that can detect the X-gene – the defining genetic trait of mutants over humans.

The Gifted marks a different kind of X-Men story than the ones we’ve seen depicted in the movies. Sean Teale, who will play the newly created character Eclipse, said what makes this series different than the films and shows is that there’s a focus on normal, everyday mutants. (So, no, no X-Jet in this series.) In speaking with CinMovie, Teale explained just what kind of series The Gifted will be:

“It’s like a street-level work at the X-Men world. It’s not flying through the air, not omnipotent, omnipowerful people with these suits on saving the world – it’s normal people that haven’t had a chance to do anything other than run. Because they’re persecuted for something that isn’t their fault, they’re just born with the X-gene.”

According to Matt Nix, the series creator, that underground network exists because the X-Men (historically lead by Charles Xavier) and the Brotherhood (historically lead by Magneto) are missing. In an interview with Comic Book Resources, he didn’t say exactly what's happening, but did provide some context. He said:

“The X-Men are gone. The Brotherhood is gone. Most of the powerful classic mutants are not around … People don’t know where they’ve gone. They are shrouded in mystery. It comes out gradually over the course of the series that there’s been a cataclysmic event, a bit of a 9/11 event, that caused enormous social upheaval and a lot of hatred towards mutants. It’s somehow related to the disappearance of the X-Men and the Brotherhood.”

One of the most common problems for mutants in the Marvel universe is constant persecution from humans. In the comics and in the past movies, this persecution is a metaphor for the persecution of any number of marginalized groups in real life. The Gifted continues this theme with the Sentinel Services, obviously viewed as a villainous organization despite being a part of the federal government in the series.

Of course, if there was some cataclysmic event caused by mutants, it warrants the thought that it may be in the best interest of everyone — the mutants themselves included — to be detained if their powers cannot be controlled. However, the drastic moves the Sentinels are using in the trailers seem to be an active critique of authoritarian big government. Further critique may be found just in the Sentinel Services’ name. Abbreviated, the Sentinel Services can be shortened to the “SS” which may be a reference to the infamous Nazi paramilitary division under Adolf Hitler in World War II. All of these critiques pose a central question people ask themselves in the face of terror, adversity, and people unlike us: how much freedom are we willing to sacrifice for our collective safety?

Moving away from big picture questions, though, many fans might have questions of how The Gifted fits into the other X-Men timelines from the comics, movies, and even other television series that already exist. Lauren Shuler Donner, X-Men franchise producer, confirmed to ComicBook.com that FX's Legion does not share a universe with The Gifted, and both are in separate universes from the X-Men films such as Logan and X-Men: Days of Future Past.

So will the X-Men or the Brotherhood appear on The Gifted eventually? That remains to be seen. Nix told IGN that the disappearance of the X-Men is something they will be exploring on the series, adding, “It's a huge deal in the world. It's one of the central mysteries of the show.” However, in a different interview, he told Entertainment Weekly, “I wouldn’t say that [the season is about] finding the X-Men.”

Regardless as to what happens this season, it will be interesting to have another unique take on such an iconic comic series. And it remains to be seen whether or not the X-Men and the Brotherhood has disappeared for good.

More like this
The First 'Percy Jackson & The Olympians' Teaser Comes With An Ominous Warning
By Grace Wehniainen
'The Lord of the Rings: The Rings of Power' Revisits Iconic Spots From 'The Hobbit'
By Darshita Goyal
A New 'And Just Like That' Table Read Pic Confirms A Key Character's Return
By Jack Irvin and Grace Wehniainen
You’ll Definitely Recognise Both Of Ty Tennant’s Parents
By Maxine Harrison
Get Even More From Bustle — Sign Up For The Newsletter