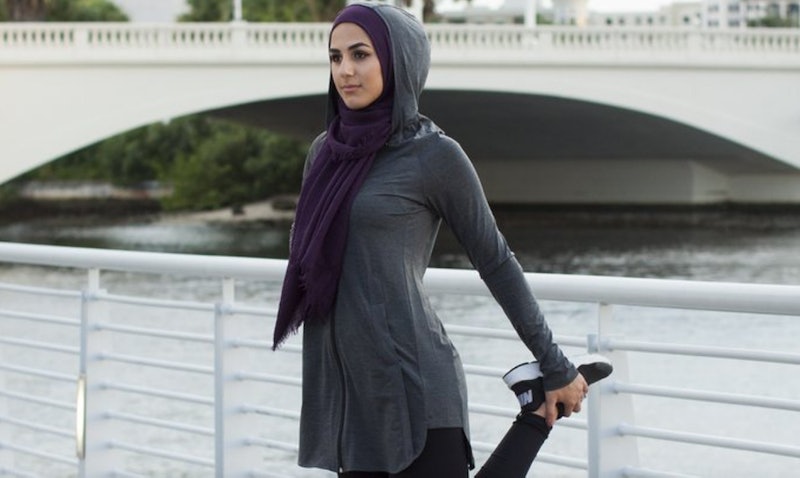 The idea of working out, for some, seems about as irritating as accidentally wearing mismatched shades of black. But others get excited at the idea of toss on their Fabletics leggings and gear up for a jog. However, not everyone is content working out, arms and legs bare and sporting a ponytail flailing in the wind. Fortunately, Verona Collection's modest active line is here to resolve some of those qualms.

Verona Collection (offers sizes XS-XXXL) was started by Lisa Vogl, who, according to HuffPost, was a photographer who converted to Islam 7 years ago. Once she saw a need for modest athletic wear, she started Verona Collection as an online boutique in 2015.

Although they aren't portrayed as such in the media, Vogl told Bustle that a lot of Muslim women are in fact active. Yet this demographic is often unable to wear activewear made for women.

"Sports, working out, and staying fit is apart of me and being Muslim certainty doesn’t change that," she told Bustle. "When I started wearing the hijab, finding modest clothing that was fashionable and affordable was a challenge and finding athletic wear that was modest was even more difficult, in fact, it was nearly impossible. Given how many hijabis are athletes and workout like myself, we knew this was a need with in our community.

"Out of all the designs that we have released, I’m most excited for this line."

The line features a selection of modest sports tops in both neutral and eye-catching hues to top off any basic pair of leggings for a workout session. The tops are all priced between $45 and $50, so you won't be splurging for some sportswear.

Verona also made it a point to include plus sizes in its active collection, a notable inclusion given the historic exclusion of plus sizes in activewear.

"Being size inclusive is something that is incredibly important to Verona, so nearly every product we offer goes up to 3X," she said. "We plan to offer even larger sizes in the future."

Although it seems Vogl threw consumers for a curveball with the name Verona, she did so to actually break the stereotypes in Islamic fashion.

"Typically, most people relate Muslims to the Middle East, however there are millions of Muslim women that were born and/or raised in western countries," She told Bustle. "So we decided to choose an Italian name that would speak to our customer base. I also specifically chose it to be an Italian name as I personally believe that’s where some of the best fashion can be found."

Additionally, Verona Collection is making an important shift in mainstream fashion. What makes this line special it that it's the first of its kind to be sold in a department store. But more specifically, at Macy's.

Other than its modest athleisure looks, Verona Collection features a variety of products including cardigans, abayas, dresses, and hijabs to serve both Muslim American women and otherwise.

In a time where inclusion is more important than ever, Verona Collection is making sure to cover all its bases in its fashion design choices.

More like this
Androgynous Formal Wear That Will Make You Feel *So* Fancy
By Megan Lasher
Harry Styles’ Red Carpet Looks Have One Thing In Common
By El Hunt
15% Pledge Director LaToya Williams-Belfort On The Impact Of Supporting Black Business
By Dominique Norman
An Honest Review of MeUndies Boxers, According To A Non-Binary Person
By Megan Lasher
Get Even More From Bustle — Sign Up For The Newsletter