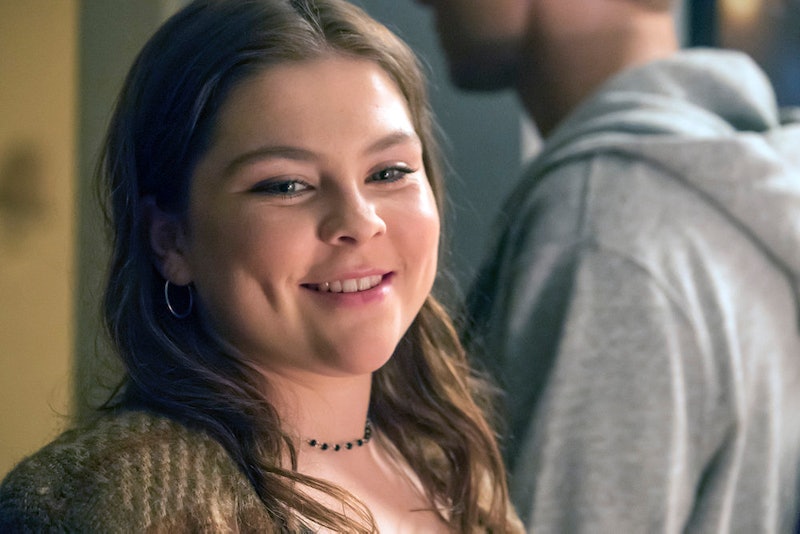 NBC's This Is Us opened its second season with a flashback (or several) that raised even more questions about Jack Pearson's death. The Season 2 premiere's ending flashback(s) also introduced previously unknown characters, like teen Randall's girlfriend and Kate's dog. Where Kate got a dog on This Is Us could actually have a lot do with Jack (Milo Ventimiglia) and be a bigger clue than fans previously thought. Since the season premiere episode aired on Sept. 26, there has been a ton of speculation about how Jack may have died and some of it has been tied to the dog: did he die in the fire saving Kate's dog? Is that why she blames herself for his death?

But first, we need to solve the mystery of where the dog came from. In previous This Is Us flashbacks, a family dog has not appeared in any capacity. Throughout Season 1, the Pearson siblings were shown as babies, young children under 10, and teens — but there was no canine companion. Yet teenage Kate holds a cute pup in her lap as she cries in that Season 2 premiere flashback. We don't know the name of the dog yet. In Season 1, Rebecca said no to Jack's suggestion of getting a dog, but earlier this year, This Is Us creator Dan Fogelman told Entertainment Weekly that a dog would be an important piece of the puzzle. "In terms of them ever revisiting getting a dog, it actually could wind up becoming a very important part of the story, long down the road," he told the publication.

In an EW interview last week, Ventimiglia said the pup could be considered Jack's dog — or belong to the family as well. That's an important clue to where the dog may have come from: The dog may have been there to aid Jack in getting sober. In the Oct. 3 episode, Jack confesses to teenage Kate that he is an alcoholic and he attends an AA meeting. According to the Los Angeles Times, the presence of pets can help people overcome substance abuse and achieve sobriety by reducing stress levels, promoting positive emotions, aiding in relaxation, and more. It's totally possible that Jack may have brought up the canine issue to Rebecca once again in relation to his alcoholism; this time she may have relented, because the pet could aid in his sobriety.

The dog's history could be even simpler than that. Perhaps Jack bonded with a stray pup and decided he or she would be the Pearson family pet. Maybe Jack does something to upset Kate and he adopts a dog to get back in her good graces. No matter the pet's backstory, it seems like Kate is close to the dog, much like she has always close to her father. That feels like a big clue that Jack definitely has something to do with bringing the puppy into the family.

Then there's also the possibility that the dog doesn't belong to the Pearsons. If the dog-revealing flashback takes place on the night of the fire, there's a good chance teenager Kate, Randall, Randall's unnamed girlfriend, and the dog aren't at the Pearson home. They could be at Miguel's or a neighbor's home and the canine could belong to that person. Kate could be simply cuddling the dog for comfort during an emotionally difficult night.

This Is Us Season 2 flashbacks seem to be exploring more of the Pearson siblings' teen years and Jack's final days or years of life, so the answer to the dog question may be closer to being revealed than we all think. As for how it fits into Jack's death, we'll just have to watch to find out.

More like this
'Line Of Duty' Fans Might Recognise These 'Bloodlands' S2 Filming Locations
By Sophie McEvoy
'The Lord of the Rings: The Rings of Power' Revisits Iconic Spots From 'The Hobbit'
By Darshita Goyal
This House of the Dragon Character Will Create Another Scandal For Rhaenyra
By Kadin Burnett
Nicola Coughlan Shared A Lady Whistledown Excerpt From ‘Bridgerton’ Season 3
By Grace Wehniainen, Alyssa Lapid and Sam Ramsden
Get Even More From Bustle — Sign Up For The Newsletter