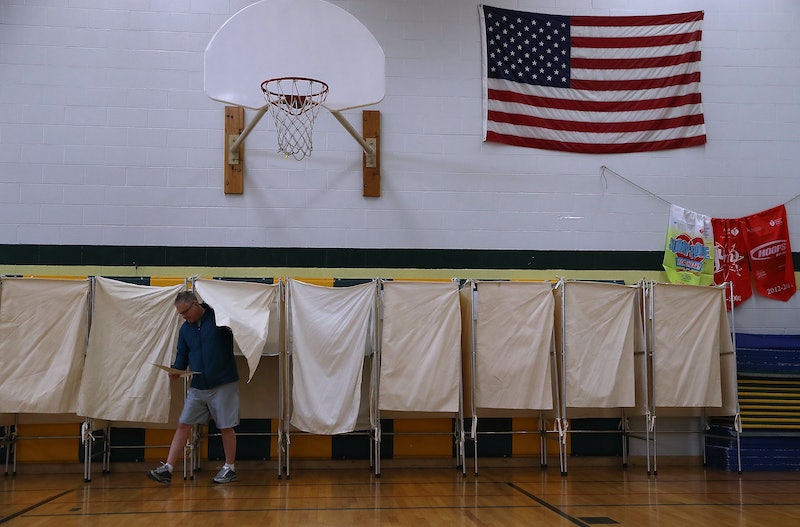 Florida drew headlines in November when residents there voted grant ex-felons their right to vote — a move that has generally been in line with where the country is going, according to the National Conference for State Legislatures. But some states go much further and never take away the that right vote in the first place: Vermont and Maine are the only two U.S. states where incarcerated people can vote for now.

Supporters of allowing incarcerated people to vote say it helps inmates stay engaged with society even when they're behind bars. "When you're incarcerated, it's hard to feel a part of a connection to the community," Tom Dalton, the executive director of Vermonters for Criminal Justice Reform, told NBC News. "We want people who are incarcerated to remain connected to the community and to be civic minded and be moving in that direction, so when they're coming out they're interested in being productive members of society."

According to NBC News, the topic doesn't get much play in Maine or Vermont; it's simply not that controversial. But Vermont is home to Sen. Bernie Sanders, which has led to the topic coming up on the national stage. He has spoken in favor of the policy prior to Monday's town hall, where several Democratic candidates were asked about the issue, as well.

"You’re paying a price, you committed a crime, you’re in jail. That’s bad," Sanders said at an Iowa town hall in April, according to The Des Moines Register. "But you’re still living in American society and you have a right to vote. I believe in that, yes, I do."

On Monday, Sanders said even "terrible people" should get to vote. Not everyone agreed with him, however. Sen. Kamala Harris said it's an issue to have a "conversation" about. South Bend Mayor Pete Buttigieg said he is against giving incarcerated Americans the right to vote, drawing plenty of criticism on Twitter, particularly from minority voices.

To be clear, this is a discussion concerning people who are in prison serving a sentence for their crime. Other, often more lenient rules apply when someone is in county jail awaiting trial. The Atlantic reported in 2018 that of the 600,000 people who are in county jail each year, "a good portion" technically retain their right to vote. Whether they actually get to, though, is another story. In some states, it depends on which county a person is jailed in — or even which jail.

On the flip side of Vermont and Maine are Iowa and Kentucky. They are the two states that still permanently bar all felons from voting, according to the Brennan Center for Justice. To varying degrees, other states allow ex-felons, parolees, and people on probation to vote eventually.

Both Iowa and Kentucky, however, have taken moves to allow ex-felons to vote. In Iowa, Republican Gov. Kim Reynolds has been working to bring Republicans on board to change the state constitution to allow Iowans who have served their sentence to vote, noting her past convictions for drunk driving. Such a bill passed the state House 95-2 in March, according to The Des Moines Register.

In Kentucky, a bill was introduced in February to put the matter before voters in 2020 in the form of a constitutional amendment, WCPO reported.

Both states would be in good company. According to the National Conference of State Legislatures, since 1996, seven states have ended lifetime prohibitions on ex-felons voting. None, though, have gone as far as Vermont and Maine during this time.