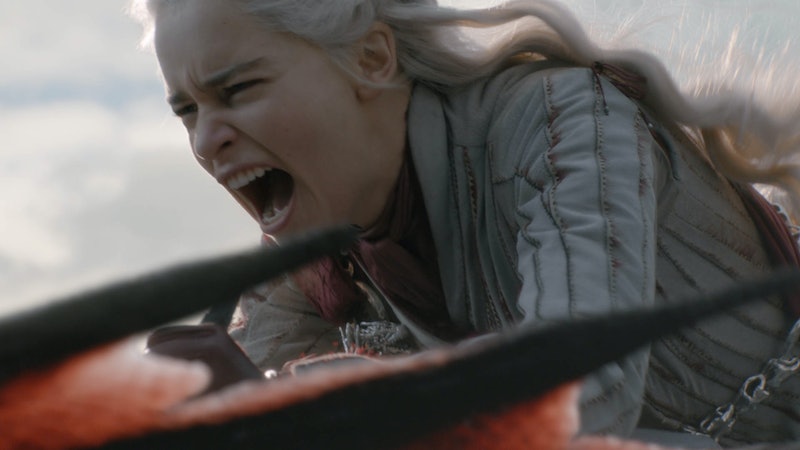 Spoilers ahead for Game of Thrones. The Mother of Dragons met her fate at the hands of Jon Snow in the Game of Thrones series finale. And while it looked as if her last surviving child would kill her murderer, the dragon instead picked her up and carried her away. It's unclear where Drogon took Daenerys' body on Game of Thrones, but it certainly wasn't to the Iron Throne. Instead of destroying Jon with his fire, Drogon turned his heat to the throne and melted it down to nothing. He then picked his Queen up in his talon and flew far away from King's Landing. And while we'll probably never see Drogon again, it's safe to say he placed his mother in her final resting place.

Daenerys' rule of Westeros and its Seven Kingdoms was short-lived due to Jon betraying his queen. And while her family's Westerosi home had been at Dragonstone, this Targaryen had spent the majority most of her time across the Narrow Sea in Essos. So it only makes sense that Drogon would fly his mother back to Essos — either to where he was was born in the wastelands beyond Lhazar or perhaps even to Old Valyria, the ancestral home of the Targaryens and where dragons once ruled.

Drogon is the last of the dragons (as far are we know). So even if he's probably not keen with working with any humans ever again, he is a special, important creature to humanity. And Bran's small council is still keeping tabs on him long after Daenerys is dead. After a time jump where Bran is now king, Grand Maester Sam gives an update on Drogon. Sam says, "He was last spotted flying east towards—" before Master of Coin Bronn interrupted and said, "The farther away, the better."

So we know for sure that Drogon went back east. After all — as Arya is working on — we don't even know what is west of Westeros. But that's not entirely the end of Drogon's story. Since the new king is a warging Three-Eyed Raven, Bran tells his small council, "Perhaps I can find him." Bronn looks mystified, but viewers know that Bran really will be able to keep tabs on Drogon in Essos from his chair in Westeros by using ravens to see what's happening. Or, maybe, even seeing through the eyes of the dragon — though it's a pretty big bummer that Game of Thrones fans won't be able to see that go down.

At the end of the day, Drogon had the opportunity to kill the person who killed his mother. But, unlike the vengeful Daenerys, he let his Targaryen brethren go and instead focused on lying his mother to rest somewhere in Essos. So while maybe Daenerys didn't get the ending that she deserved, Drogon got the only, extremely heartbreaking, fitting ending for him based on everything that went down. Just as Daenerys will never conquer another city, Drogon is also at rest now — hopefully living his final days as peacefully as a fire-breathing dragon can.