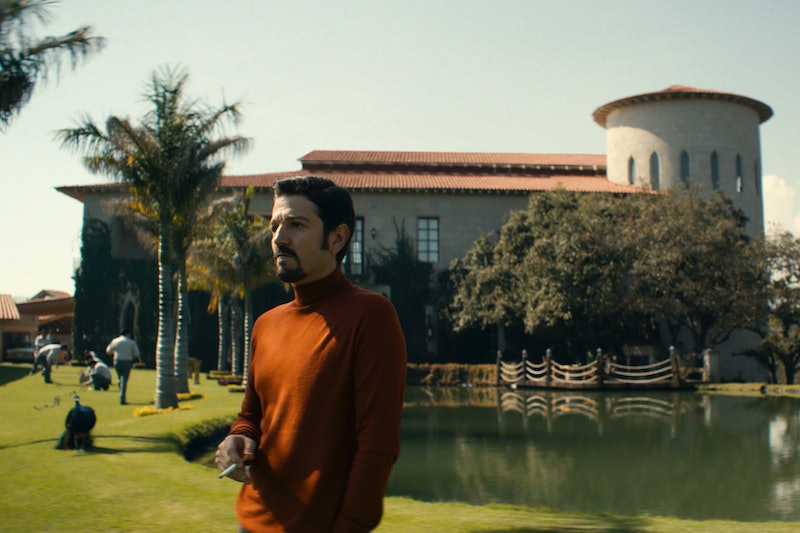 The lure of both the original Narcos and Narcos: Mexico is knowing that pretty much everything you see go down onscreen happened in real life, too. Sure, it's possible that Walt and Felix didn't share a tense convo in a Mexican prison's visitor wing (although...who knows!) but it's true that the drug kingpin was eventually taken down for his crimes. As of 2020, Miguel Ángel Félix Gallardo is serving a 37 year prison sentence, as reported by the Associated Press, for the killing of DEA agent Enrique "Kiki" Camarena. This is on top of an initial 40 year sentence from 1989 for drug trafficking, bribery and weapons convictions, per The Washington Post.

Camarena's murder drew international attention to the brutality that Gallardo and other Mexican cartel leaders were using to keep drug and arms empires up and running. The agent's murder launched Operation Leyanda, which is the focus of Narcos: Mexico Season 2, chronicling the homicide investigation and the eventual takedown of Gallardo. Gallardo's arrest was a major turning point in the history of the War on Drugs in the U.S. and Mexican history. Gallardo's detention created a power vacuum that allowed other drug lords to prosper, including the infamous Joaquin Archivaldo Guzman Loera, better known as El Chapo.

Gallardo may have been one of the most powerful people in the world in the late '80s, but he's been reduced to writing open letters about his current situation in prison.

In 2011, the Washington Post reported that the wife and children of Gallardo published an open letter to Mexican Public Safety Secretary Genaro Garcia Luna, stating that their husband and father was being mistreated in the medium-security prison in Guadalajara where he is currently being held and not being given proper medications. The letter stated that, "For more than three years, without any justification, prison authorities have kept him segregated, isolated and without contact with other inmates, and have prevented him from participating in any physical, sports or educational activities." Gallardo has also signed a letter penned by his former business partner, El Chapo, claiming that the conditions at the federal prison in Almoloya, Mexico are also inhumane.

Gallardo has spent the last quarter-century in prison, although that hasn't stopped him from continuing to try and make his mark on the world. In 2008, with the collaboration of journalist Diego Osorno, Gallardo smuggled a collection of memoirs he wrote in prison to the Mexican magazine Gatopardo, where they were subsequently published. The memoirs cover everything from how he ran his businesses to his family's reactions to his amassed fortune.

If you're curious about what happens next, those most be the best things to read — or just wait for another season of Narcos: Mexico to pick up where Gallardo's reign ends.

More like this
Here's What Jeffrey Dahmer's Dad Has Said About His Other Son, David
By Grace Wehniainen
Where Is Lionel Dahmer Today? Jeffrey Dahmer’s Father Reflected On The Serial Killer’s Death In 2020
By Brad Witter
Glenda Cleveland Died 2 Decades After Trying To Turn In Neighbor Jeffrey Dahmer
By Brad Witter
Alleged Cult Leader Larry Ray Is Awaiting Sentencing Following His Conviction
By Brad Witter
Get Even More From Bustle — Sign Up For The Newsletter

This article was originally published on November 16, 2018