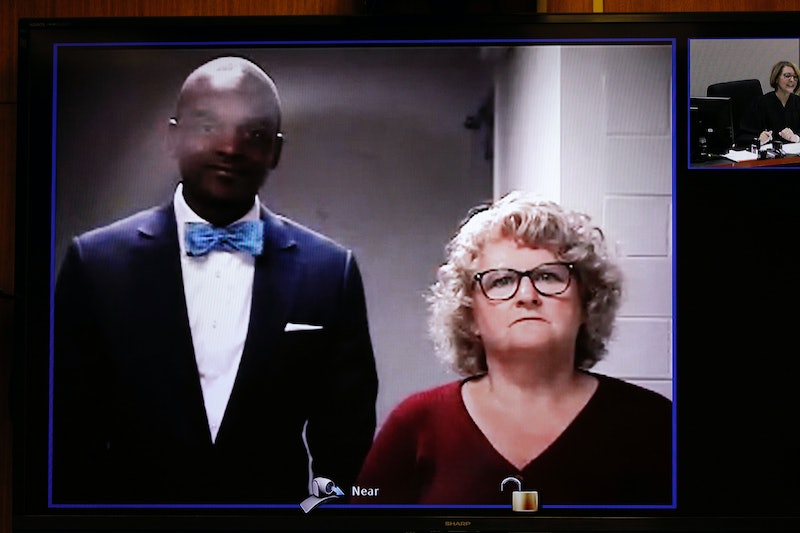 In February of 2018, former Michigan State University (MSU) and USA Gymnastics team doctor Larry Nassar was sentenced to 40 to 125 years in prison after pleading to three counts of criminal sexual misconduct, per CNN. (Earlier that year, he'd received a sentence of 40 to 175 years for similar charges in another county; he'd also been sentenced to 60 years for possession of child pornography in a separate case.) As the investigation against him proceeded and the startling number of accusations came to light, the investigation shifted to Nassar's colleagues, some of whom had allegedly known about the accusations for years. Former MSU Women's Gymnastics coach Kathie Klages worked closely with Nassar for over two decades and is mentioned in the new HBO documentary At The Heart Of Gold, airing May 3. So where is Klages today?

In August of last year, Click On Detroit reported that Klages was formally charged with two counts of lying to a police officer in connection to the investigation of Nassar — one a felony charge, the other a misdemeanor. The misdemeanor only carries a sentence of imprisonment for not more than two years, a fine of not more than $5000, or both. The felony charge isn't much more severe: imprisonment for not more than 4 years or a fine of not more than $5,000 are possible. Some witnesses alleged that Klages had known of complaints about Nassar for two decades. Her bond was set at $5,000.

Featuring interviews with numerous survivors, At The Heart Of Gold is a painful look at how Nassar operated within systems that should have protected the women and girls he's confessed to abusing. If the allegations against Klage are true, she's responsible for deliberately downplaying and withholding information that could have stopped Nassar far earlier.

AOL reports that former gymnast Larissa Boyce claims she told Klages in 1997 that Nassar was abusing her during what were supposed to be routine medical exams. Boyce testified at Nassar's January 2018 sentencing hearing, “This could have stopped in 1997. But instead of notifying authorities or even my parents, we were interrogated. We were led to believe we were misunderstanding a medical technique … I told somebody. I told an adult. I told Michigan State University."

Per the Lansing State Journal, during one of Nassar's sentencing hearings, Boyce claimed that Klages had "interrogated" her and another girl — 14 at the time of her complaint who still remains anonymous — about their accusations. She also told the press that Klages had warned her not to report Nassar to authorities or tell her parents.

According to the Detroit Free Press, Klages officially retired from MSU a few days after the university suspended her, back in February of 2017. "Like many others, MSU Gymnastics Coach, Kathie Klages, is deeply disturbed by the recent allegations and lawsuits brought against Dr. Larry Nassar, Michigan State University, and others,” her attorney Shirlee Bobryk said at the time.

WLIX reports that, at her last court appearance Klage's trial was tentatively scheduled for July 8, 2019, with hearings for motions to be filed expected to push the date back. She has not made a public statement since turning herself in to authorities last year.

More like this
Alleged Cult Leader Larry Ray Is Awaiting Sentencing Following His Conviction
By Brad Witter
Gabby Petito’s Family Responded To The New Lifetime Movie About Her Final Days
By Grace Wehniainen
After The Bling Ring, Nick Prugo Was Embroiled In Another Scandal
By Arya Roshanian
Everything You Need To Know About ‘Black Panther: Wakanda Forever’
By Bustle Editors
Get Even More From Bustle — Sign Up For The Newsletter