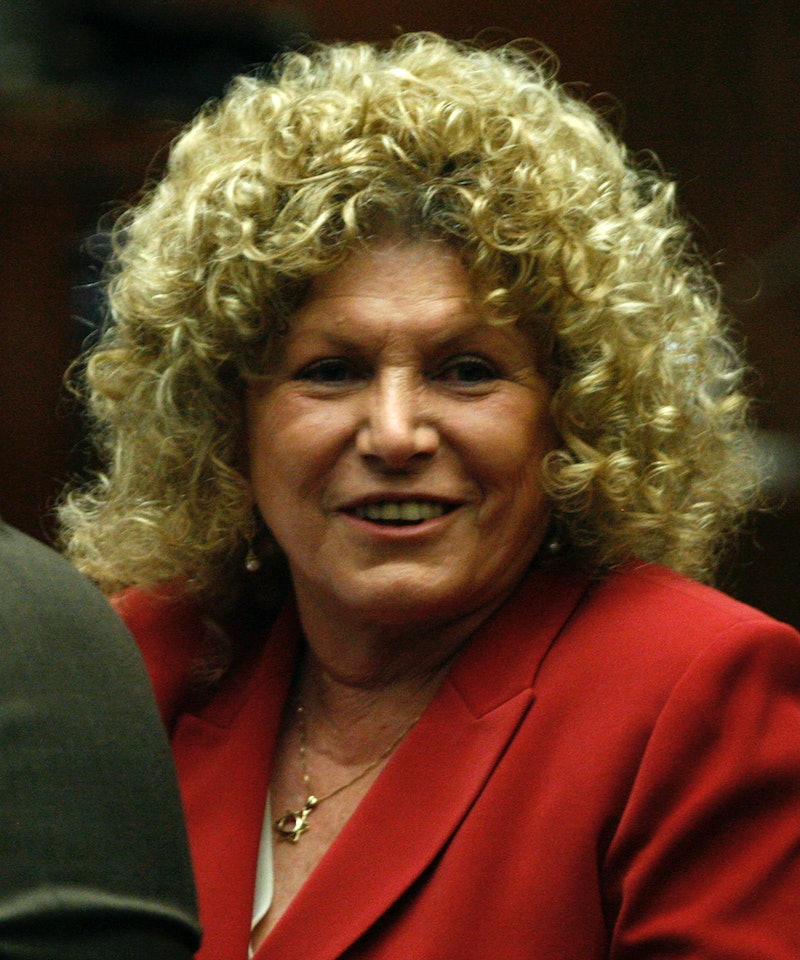 The trial of Erik and Lyle Menendez ranks among the most infamous — especially for '90s crime scandals. After being accused and according to the L.A. Times, subsequently confessing to the murders of their parents, Kitty and Jose Menendez, the brothers' trial that followed drew national attention. (The brothers were later convicted and sentenced to life in prison.) One of the most memorable figures to come out of the situation, besides Erik and Lyle, was their committed defense attorney, Leslie Abramson, played by Edie Falco in the new anthology series Law & Order True Crime: The Menendez Murders. But, what is the real Leslie Abramson doing now in 2017?

Per Rolling Stone, the Menendez brothers were sentenced to life in prison without the possibility of parole. Of course, this wasn't for a lack of enthusiasm on the part of their defense. The L.A. Times reported that Abramson might have just been the best criminal defense attorney out there, and was certainly known for her ferocity in the courtroom. She told the L.A. Times that she liked taking on the hardest cases she could because she simply enjoyed the challenge. When asked whether she actually liked to compete against herself, Abramson commented, "I like to torture myself is closer to the truth." This is the same woman who The Washington Post once called, "a 4-foot-11, fire-eating, mud-slinging, nuclear-strength pain in the legal butt." So, there's that.

Abramson actually almost got into hot water during the Menendez trial. According to Newsweek, she was accused of tampering with evidence by allegedly asking Dr. William Vicary to edit his notes from his psychiatry sessions with Erik. The same article reported that when Vicary was on the stand and asked why the prosecution's notes from Erik's jailhouse psychiatric sessions didn't match, Vicary claimed that he had edited the notes on Erik under alleged pressure from the defense. This led to talk of possible disbarment but, as the New York Times reported, the district attorney's office decided not to open a criminal investigation. The NYT also reported that Abramson claimed "she asked the psychiatrist only to edit portions of his notes that infringed on patient confidentiality or that were ambiguous. She has denied any wrongdoing."

Today the lawyer's life is decidedly less public. In fact, according to showrunner René Balcer, per Entertainment Weekly, the real Abramson opted not to have anything to do with the new NBC show. As Balcer said in the article, “She’s having a nice life, a nice retirement.” Falco didn't even attempt to contact Abramson after learning of her disinterest in participating in the series. Of course, this meant that Falco had to rely on people who worked with Abramson and according to a Vanity Fair interview, did her own research like reading Abramson's 1997 book called, The Defense Is Ready: Life in the Trenches of Criminal Law to properly get into the character.

Nowadays, Abramson seems to be enjoying her private life, but she still makes appearances and is respected in legal circles. In 2015, she gave the Ruth Bader Ginsburg lecture at the Successful Women and The Law conference that was held at the Thomas Jefferson School of Law in San Diego, California. In her lecture she touched upon the high profile cases in her career like the Menendez trials, saying, "What I think is something necessary to be a great criminal lawyer is something I think women already have, a desire to understand people and human relationships.”

She may not be fighting for clients in the courtroom anymore, Abramson remains a force in the legal world and an inspiration for future defense attorneys everywhere.

More like this
Where Is Armie Hammer’s Ex-Wife Elizabeth Chambers Now After 'House Of Hammer'?
By Grace Wehniainen and Radhika Menon
Where Is The Bling Ring’s Rachel Lee Now?
By Arya Roshanian
What Is 'Pretty Wild' Star Tess Taylor Up To Now?
By Morgan Leigh Davies
Lori Vallow’s Son Was Arrested For Sexual Assault Days Before 'Sins Of Our Mother' Premiered
By Brad Witter
Get Even More From Bustle — Sign Up For The Newsletter