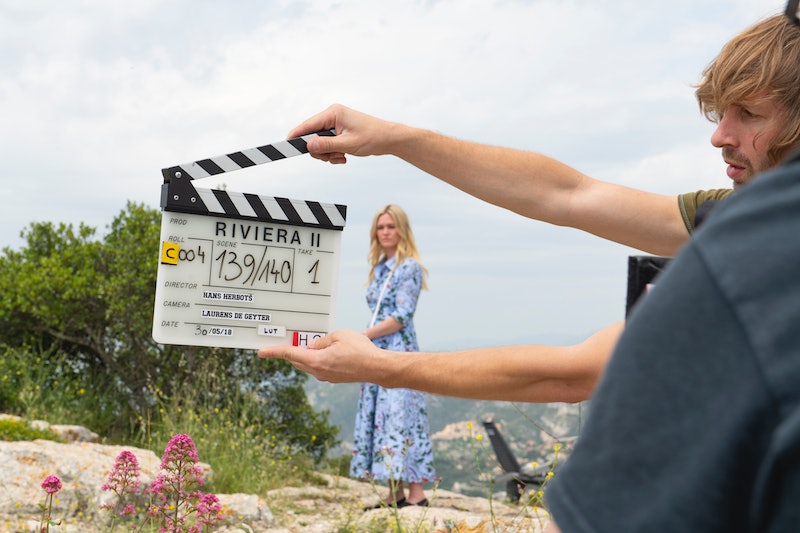 Never before has being in the midst of scandal seemed more appealing than on Sky Atlantic's Riviera. And now that series two of one of TV's most stylish shows is just around the corner, I'm looking forward to the drama just as much as all those pastel-coloured skies, clear waters, and beachscapes that seem to transport me through my TV to the best holiday imaginable. So, now that I'm looking at flights for this summer, I need to know: where is Riviera filmed?

As Digital Spy reports, the show began filming in Nice, France, on May 21, 2018, but — as its namesake suggests — the show's become most commonly associated more broadly with the French Riviera, also known as Côte d'Azur. So, if you're looking to get a taste of Riviera life on the Riviera this summer, then the Evening Standard has some suggestions for you.

Posted on Sept. 28, 2017, while Riviera's first series was in full swing, the site introduced you to five of the show's filming locations that you can visit IRL, including the super fancy restaurant featured in a couple of scenes, as well as pointing you towards the places where you can find some of those mesmerisingly beautiful backdrops.

It's pretty rare for a TV show to be filmed on location in the French Riviera, Atlas Of Wonders writes, owing to the enormous production costs. But with an incredible setting and an incredible cast (I mean, they did bag Julie Stiles, after all), you can bet that the showrunners were given a very generous budget for Riviera. What I love about this show, though, is how you can tell that the money was put to really good use, as they made the most of a very special location — filming everywhere from the Nice Square to the The Port of Villefranche-sur-Mer, according to Atlas Of Wonders.

However, taking a trip to any of these places will require a sizeable piggybank. The French Riviera has always been considered a premium resort, but, as the Daily Mail reported, on Sept. 29, 2017, flight prices increased by 614 percent in the first two weeks of Riviera's airing, and those wanting to fly from London allegedly had to expect an outrageous increase of 1,195 percent. I suspect that when series two of Riviera airs on Sky Atlantic on May 23 2019, flight prices might get even higher. So, it looks like my holiday plans might be scuppered.

Or, maybe not. It turns out flights to Nice are super cheap outside of high season, when all the tourists are going for their summer holidays. The least expensive time to go is October, when temperatures will still hover around 20 degrees, according to Holiday Weather. Around this time, many flights total up to less than £50, as I've surveyed from the Sky Scanner site. So, if you're feeling spontaneous and under-sunned, I'd bag one of those flights now if I were you.