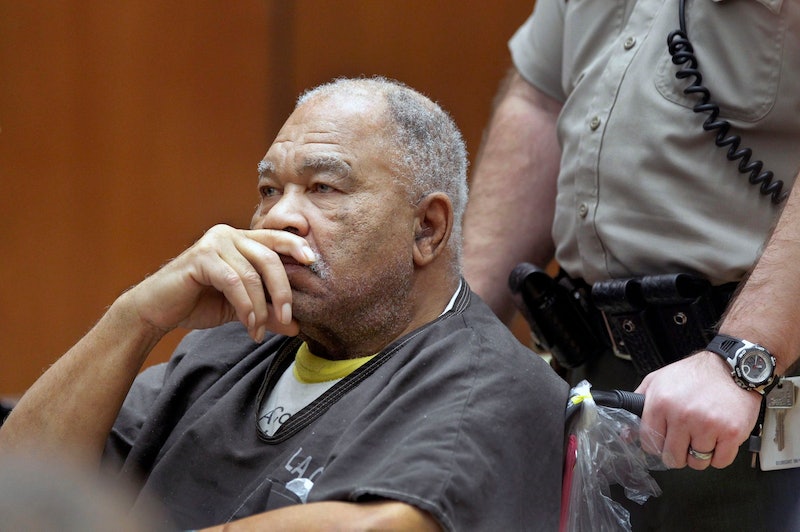 The Channel 4 documentary Confessions of a Serial Killer will take an in-depth look into the story Samuel Little, who confessed to killing more than 90 women in the U.S. over a four-decade period. The documentary is fronted by journalist and filmmaker Ben Zand, who aims to discover what Little's motives were, and why he managed to get away with the crimes for so long. But where is Samuel Little now?

Warning: This article contains information about homicide and the serial killer Samuel Little, which some may find triggering.

According to the Guardian, Little was serving a life sentence in California State Prison without the possibility of parole after being found guilty of three murders. The 78 year-old was first convicted back in 2014, however, after a shocking confession, Little was transferred to a Texas prison in 2018. As reported by the Daily Mail, Little confessed to killing more than 90 women across the United States between 1970 and 2005 — a number which, if true, would make him the most prolific killer in U.S. history. As it stands, investigators have linked Samuel to 34 of the murders in question, and the FBI claim that the aim of his confession was to secure a transfer from California to Texas. In September 2018, he was eventually moved to Texas in order to face trial for the murder of Denise Christie Brothers.

In an official report released back in November 2018, the FBI stated that investigators had "only recently begun unraveling the true extent" of Little's alleged crimes — and revealed that his reported violent history has kickstarted an investigation that is taking place across 36 cities and 16 states. Speaking about the case, the FBI's Kevin Fitzsimmons said: "The biggest lesson in this case is the power of information sharing. These connections all started in our database of violent crime."

As mentioned previously, the terrifying true-story of Samuel Little's crimes will be the focus of the brand new Channel 4 documentary, Confessions of a Serial Killer. According to the Radio Times, the doc follows film-maker Ben Zand as he travels across the U.S. from California to Mississippi with the aim of uncovering the truth behind this harrowing murder case. Zand will also set out to discover how Little was able to live freely for so long, despite allegedly having killed more than 90 women throughout his lifetime.

Little's horrifying confessions are at the forefront of the Channel 4 documentary, which will air "never-before-heard audio tapes," the Radio Times states.

Zand is known for his work on a variety of BBC documentaries. As well as Confessions of a Serial Killer, he also worked on Is This Sexual Harassment?, which came out in Jan. 2019, World’s Most Dangerous Cities with Ben Zand in Oct. 2018, Trump: A Very British Welcome? in July 2018, and R Kelly: Sex, Girls & Videotapes in April 2018.

Confessions of a Serial Killer airs on Monday, May 27 at 9 p.m. on Channel 4, and if you're a fan of gripping true-crime stories, you won't want to miss this out on this insightful documentary.

More like this
What Reporting On The UK’s Most Prolific Cyber Stalker Taught Me
By Sirin Kale
After The Bling Ring, Nick Prugo Was Embroiled In Another Scandal
By Arya Roshanian
'The Ex-Wife’s First Look Pics Are Giving 'Gone Girl' Vibes
By Bustle UK
15 Piping Hot Behind-The-Scenes Secrets From 'Great British Bake Off'
By Emily Dixon and Darshita Goyal
Get The Very Best Of Bustle/UK