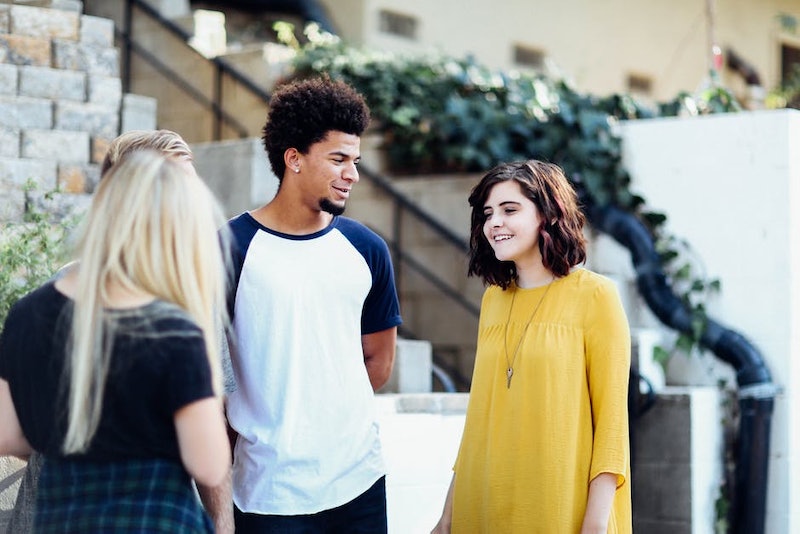 It's a no-brainer that when you find someone you're romantically interested in, you probably don't look at their body the same as you would someone who is a friend; but new research may have pinpointed more specifically how people look at the human body differently when it's a potential friend versus a potential mate.

A joint study by Wellesley College and the University of Kansas looked to determine how to tell if someone found another person "attractive" (tricky, since the word might mean something different to everyone). Researchers rounded up 105 heterosexual undergrad students and had them look at photos of men and women, deciding whether they wanted to be friends with the person in the photo, or date them. Meanwhile, the researchers tracked their eye movement. Here's what they found.

When men and women were evaluating the dating potential of an opposite-sex person, they would tend to stare at the head or chest longer and more often. When they were leaning toward evaluating someone as a platonic friend, they stared at the legs or feet more. Another interesting finding was that in general, men looked most at the chest and waist/hip region of women, regardless of whether they were evaluating them as a potential friend or a potential mate.

Some of these findings are largely in line with what other research has found — from an evolutionary standpoint, anyway. For instance, some scientists theorize that breasts signal to men a woman who is nutritionally healthy, youthful, and fertile, and would thus make the ideal mate. This might also help explain why men are so interested in the waist and hip region: some studies say that in specific, the waist-hip ratio is of particular interest to men, as a more curvaceous body might signal better fertility, and therefore be more attractive.

There are a couple of caveats with this study. For starters, the sample size was small and not representative of the general population, particularly because the participants were all undergraduate students and all heterosexual. Additionally, as stated earlier, beauty and attraction are in the eye of the beholder and have no single definition. Having a study evolved around attraction is difficult because it's so abstract.

It's also important to remember that these results aren't the definitive answer to whether or not a man might be interested in you. If he's staring at your legs, he might love your legs and could be interested romantically; similarly, if he's staring at your chest, maybe he just loves boobs but has no interest in you aside from that. Relationships (of all kinds) involve a lot more than gaze. But they are interesting findings, nonetheless!

More like this
Think Your Partner Is Cheating? These Tarot Cards May Confirm Your Suspicions
By Kristine Fellizar
The Differences Between Kinks & Fetishes, Explained
By Lexi Inks
Wanna Try Hinge's New Video Prompt Feature? Here Are 7 Tips
By Lexi Inks
6 Dating App Tips To Try If You're Looking For A Serious Relationship
By Lexi Inks
Get Even More From Bustle — Sign Up For The Newsletter