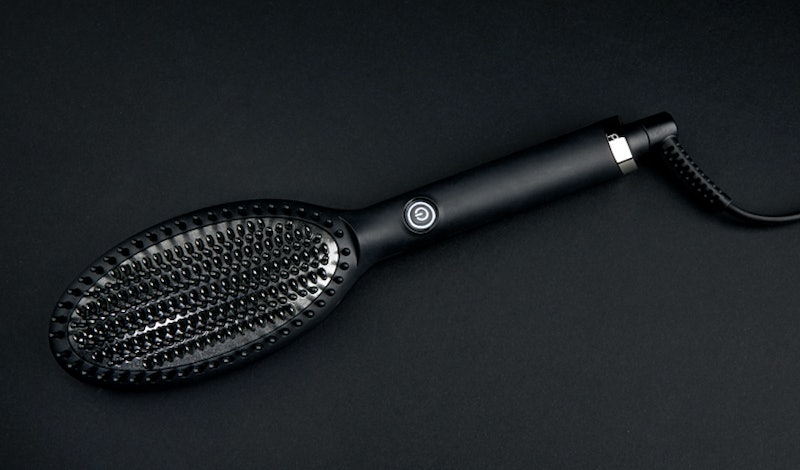 Picture this. It's a Monday morning and you've snoozed your alarm god knows how many times. You washed your hair on Sunday, but are dreading that layer of frizz that always seems to reveal itself exactly 24 hours post-wash. Despite this, you still can't be bothered to spend ages styling those locks until they look salon-worthy. And now you only have 15 minutes to get out the door. Enter ghd's brand new invention: a heated brush that tames tresses in just a few minutes. If you're wondering where to buy ghd's Glide Hot Brush, you're in luck as the innovative styling tool hasn't even been released yet.

The £125 hairbrush is currently available for pre-order on the ghd site. If you order now, the brand promises to send it via free delivery on Feb. 6; just in time to solve those winter woes. According to ghd, the brush is designed for second day dry hair and aims to give you the "I woke up like this" look.

Its design and technological elements sound pretty impressive. Ceramic technology and an ioniser are used to heat the brush to a temperature of 185ºC while simultaneously banishing frizz. As Stylist reports, this temperature allows hair to enter the "glass transition phase" which means it can be effectively styled without causing damage.

The Glide brush also houses a range of bristle lengths which allow you to style large sections of hair. There are 99 short ones for optimal shaping, 36 medium ones that act as a barrier between the heat and the scalp, and 88 long bristles for detangling. The tool is quick too with the ability to brush and straighten an entire head of hair in a couple of minutes. (Note that it takes 90 seconds to fully heat up.)

As well as reducing your morning prep time, ghd has ensured that no accidents will occur. The brush comes with an automatic sleep mode — which will force it to switch off after 60 minutes of non-use — and a 2.7 metre long cable, so you can take it anywhere and, more importantly, won't have to move a mirror closer to a plug socket. Stylist also reported that ghd tested the strength of the brush by dropping it over 150,000 times. The result? It didn't break once.

A few reviews have already been posted on the site. Most customers have given the product four or five stars. One reviewer said the brush heats up quickly and "had no trouble gliding through [her daughter's long and thick] hair, detangling, smoothing, and leaving it soft and shiny."

Another said she has replaced her hair straighteners with the brush while yet another reviewer praised the tool's fringe-styling capabilities. In fact, the only slightly negative response I could find stated that they thought the Glide brush was quite heavy to hold.

It seems beauty brands are finally catering for people who find themselves in a rush more often than not or for those who just want to spend a few extra minutes in bed in the morning.

And who doesn't dream of that?