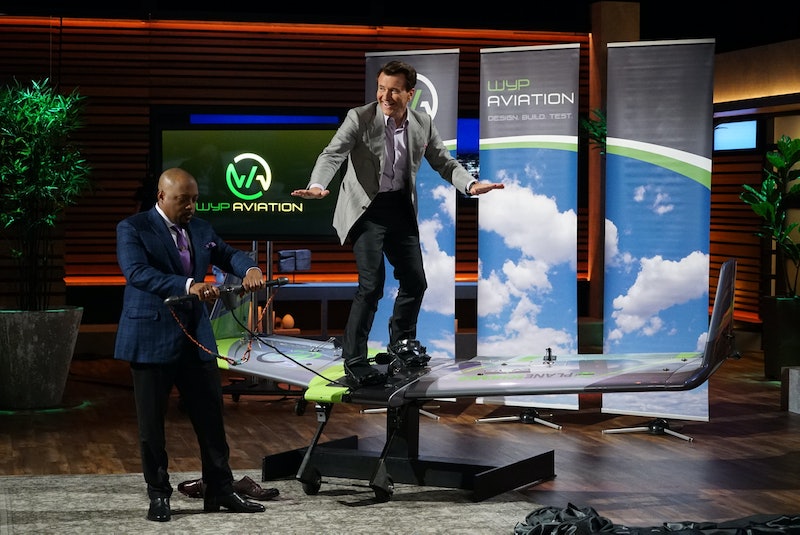 You’ve heard of skateboards and surfboards, snowboards, and longboards, but have you ever heard of a Wingboard? Shark Tank Season 9 premieres on Oct. 1 and will feature a pitch of just that: a new type of sports board to ride. But just what's the Wingboard and where can you buy it? Well, basically, it’s the wakeboard of the skies and looks like it could be the new favorite pastime of adrenaline junkies across the globe.

According to the product's website, future fliers need only step onto what looks like a cross between a stealth bomber and a Hoverboard, while holding onto the end of a rope for dear life as a plane pulls you up off the ground and through the clouds. Situated behind the plane, you shift your body around while holding the rope to alter the pitch and trajectory of how the Wingboard follows the plane you’re attached to. When you’ve had your fill of flying, you can either land right behind the plane where you started or ditch the board, in mid-flight with a parachute.

It seems that new sports boards are something of a mainstay on Shark Tank as there have been a good number that have found their way onto the show. Luckily, for the Wingboard’s creator, Aaron Wypyszynski, the Sharks also seem to have an affinity for such boards when they appear. In past seasons, deals have been struck that amount to hundreds of thousands of dollars in investments with Fitboard, Hamboard, and the Inboard, respectively. In fact, in the season premiere of Shark Tank, Wingboard will compete against another sports board called the LockerBoard. As the name suggests, this is a skateboard that can fold up small enough to fit into lockers and other tight spaces and yet, be unfolded again for the next use.

Wypyszynski is an aeronautical engineer, according to the official website, and has both a bachelor’s and a master’s degree from Purdue University. He says in a promotional video that he was inspired to create the Wingboard from a Disney cartoon he used to watch as a kid. That apparently inspirational series was called Talespin and focused on The Jungle Book characters flying around in planes circa the '30s. So…pretty different than the original 1967 animation. “It’s something I used to watch every day after school," he says in the video. "One of the characters would hop out of the back of the airplane, throw a little wing under his feet, grab onto a rope behind the airplane, and just carve through the sky.”

For those of you who don’t remember, or didn’t catch Talespin reruns in the mid-to-late '90s, the character he was referring to is Kit Cloudkicker. He was a character that used to help Baloo navigate his cargo plane and escape from flying pirates in the show. His metal fan served as the inspiration for Wypyszynski to create his invention, and the two objects are not all that different now, with the Wingboard as a real-life product. Both basically are just wing-shaped pieces of metal on which to stand — and a rope to hold onto.

Aside from the price point, it seems like this Wingboard might be a tough sell for other reasons, namely that it won’t be available until the end of the year. The Sharks love to hear sales numbers, too. However, without actual product and still in the testing phases of development, there may not be enough evidence for any of the Sharks to bite on the board, no matter how cool it looks.

More like this
24 Years Ago, 'Friends' Dropped Its Most Underrated Ross & Rachel Episode
By Grace Wehniainen
Netflix Reveals First Look At Wednesday In The 'Addams Family' Spinoff Series
By Bustle Editors
The Bling Ring's Alexis Neiers Has Come A Long Way Since Her 'Pretty Wild' Days
By Sophie McEvoy and Arya Roshanian
Here’s Where You Can Stream 'Schitt's Creek' After The Comedy Leaves Netflix
By Brad Witter
Get Even More From Bustle — Sign Up For The Newsletter