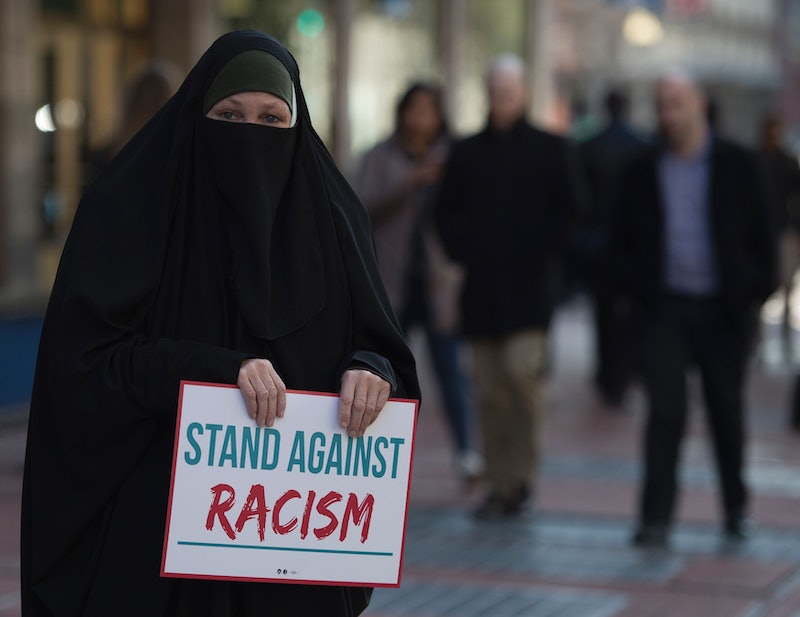 This is a historic week, and you have a chance to be a part of it by taking part in the Women's March on Washington. With less than a week to go, it's time to start figuring out the nitty-gritty details, like where to meet for the Women's March. Luckily, that information is readily available pretty much anywhere you turn online — and you don't even have to be in Washington to take part.

If you do happen to be in the nation's capital, plan on coming to the intersection of Independence Avenue and Third Street SW, which is right in front of the Capitol Building. You can find all of the Women's March event details on their website, but just to sum it up for you, the event starts at 10 a.m. on Saturday. It would be smart to get there well in advance, though. This could be the biggest protest in American history, so you'll need to secure your spot — and soak in the atmosphere. Just so they can get a sense of numbers, the Women's March organizers would like you to register if you're planning on coming. Still, don't worry — participation is totally free.

If you're not in D.C. and you can't get there yourself, have no fear! There are hundreds of sister marches planned in cities all over the U.S. and the world. There's a women's march in Guam, another one in Nigeria, even one in the former Soviet republic of Georgia — not to mention three in the American state of Georgia. It's not just Americans abroad marching in those places, either. In the Love Trumps Hate sister event in Prague, Czech Republic, for example, the organizers, moderators, speakers, and attendees include Americans, Czechs, and others — anyone who wants to protect the march's values of equality and justice for all.

It's a showing of solidarity like you may never have seen before, and it's worth having a look at the list of sister women's marches just to warm your heart. Even if you can't get to one yourself, you are not alone — hundreds of thousands of people will be marching all around the globe. If you can't make it to the intersection of Independence Avenue and Third Street SW in Washington, why not go to the center of your town and post a photo of support from there? Take the inclusivity of this march to mean that you are a part of it if you want to be, even if you're not physically marching with a big crowd.