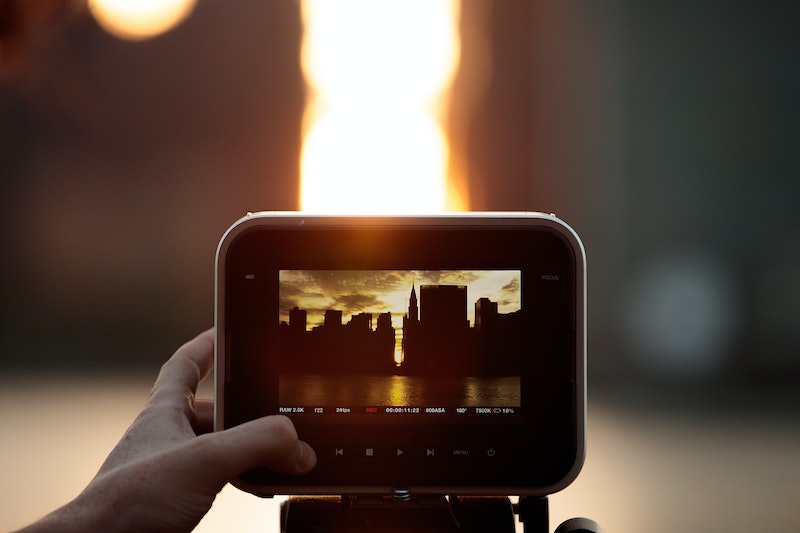 Twice a year, a two-day celestial event turns a dark, urban landscape into a illuminated and heavenly setting. It's worth marking the calendar to remind yourself where to see Manhattanhenge 2017, because the spectacular event is one of the most unifying experiences New Yorkers have together.

During Manhattanhenge, people flood the streets with their phones and cameras in the air, sighing in awe together as they simultaneously try to take in the miraculous imagery, and get that golden Insta. It's a wildly communal and serene event, maybe one of the only times that New York City feels quiet. People are just too busy admiring how gorgeous the city looks under the low and warm glow of the sun aligned just so, in the sky.

The first Manhattanhenge of 2017 occured on May 29 and May 30, so the last two sky shows of the year are on July 12 and July 13, at approximately 8:20 p.m.. According to The Weather Channel, the best places to check out the sights are going to be facing west on 14th, 23rd, 34th and 42nd streets — those streets are aligned in such a way that the sun will surely pass right between them.

Those wide, straight streets lead straight out to the water, so when the sun comes between them, it will be perfectly framed, with nothing blocking your view — expect maybe the thousands of other New Yorkers trying desperately to win Instagram. But you won't mind and you won't blame them, because you'll be trying to do the same thing. Unless of course, it's incredibly overcast or storming — which unfortunately is a possibility this year — it won't be hard to find the sight.

Of course, if you're a New Yorker, you probably won't have to go too far to check out the view. So regardless what the weather report tells you, you might want to check it out anyway, you never know when the sky will clear up just long enough for the perfect picture.

And yes, if you were wondering, the quirky title is inspired by the Stonehenge, the ancient monument in England that was erected to celebrate the sun on the solstice by being built to frame it perfectly. And while the architecture of New York might not be as historically relevant, the concept adheres. It's magical nonetheless.

So make sure your phone is charged and has enough storage space to take tons of pictures and head to a major street, facing New Jersey (aka west). The best place to see the sight is in the middle of a cross walk, so make sure you look both ways and follow standard traffic laws. Safety first, incredible Instagram second.

More like this
Craving The Beach? Here's Your Guide To A Solo Vacation In Turks & Caicos
By Alexis Morillo
5 Ways To Help People Impacted By Hurricane Ian In Cuba & Florida
By Emma Carey
8 Completely Unserious Tips To Make Your Cuffing Season A Success
By Ginny Hogan
The Historical Meaning Behind Why Autumn Is Called ‘Fall’
By Chelsey Grasso
Get Even More From Bustle — Sign Up For The Newsletter