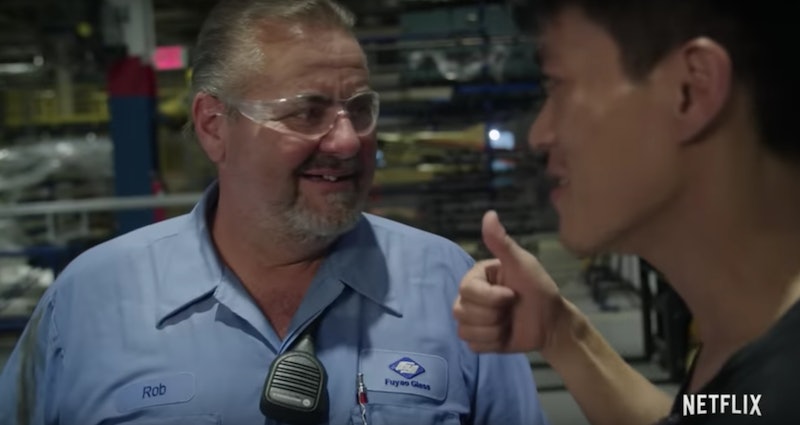 It seemed like a story of hope after one of defeat. A few years after filming the 2009 short doc The Last Truck: Closing of a GM Plant in Moraine, Ohio, documentarians Julia Reichert and Steven Bognar got word that a new plant was opening in its shell. A Chinese company named Fuyao was bringing the world's biggest auto glass manufacturer into the economically depressed area. What actually unfolded is the meat of American Factory, Reichert and Bognar's documentary which follows the hopes, hardships, and clashes that rolled out with the production line. The film is nominated for Best Documentary, and if you'd like to catch it before the Oscars, here's where to stream American Factory.

In 2018, Michelle and Barack Obama created a production company, Higher Ground, in partnership with Netflix "to harness the power of storytelling," said Barack in a press release. "We believe each of these productions won’t just entertain, but will educate, connect, and inspire us all." American Factory is the first film backed by the production company, and is available to stream on Netflix right now. And when the Oscar contenders were announced, the former FLOTUS was among the first to congratulate the directors on their nomination.

The film sheds light on the current state of labor and economics through a completely human (and surprisingly humorous) story. "We had an opportunity to do a snapshot of what it’s like in the world where working-class people, regardless of where you’re from, [are] under more pressure," Reichert told Rolling Stone. "Opportunities are fewer, the billionaire class is growing, and the possibilities for your lives are getting squeezed. This film asks big-picture questions: Is this the way the world has to be? Is this sustainable? Is this right?"

The documentary was filmed over three years, which the directors feel was key to gaining the trust of suspicious workers. "It’s presumptuous what we do — we go into the lives of people we don’t know and say, 'Trust us to tell your story,'" Bogner told Oxford American. "We spend a lot of time making these films, and people, I feel, come to realize that we’re in it for the long haul."

American Factory captures the complex international state of labor, yet does so through an endearing, engaging, and very human lens.

More like this
These 2 Women Could Be America’s First Lesbian Governors
By Tess Garcia
These 25 Female Governor Candidates Won Primaries & Could Make History
By Tess Garcia
These 25 International Horror Movies On Netflix Prove Fear Is A Universal Language
By Bustle Editors
What’s New On Netflix: Ana De Armas’ 'Blonde' & A Nick Kroll Special
By Arya Roshanian
Get Even More From Bustle — Sign Up For The Newsletter