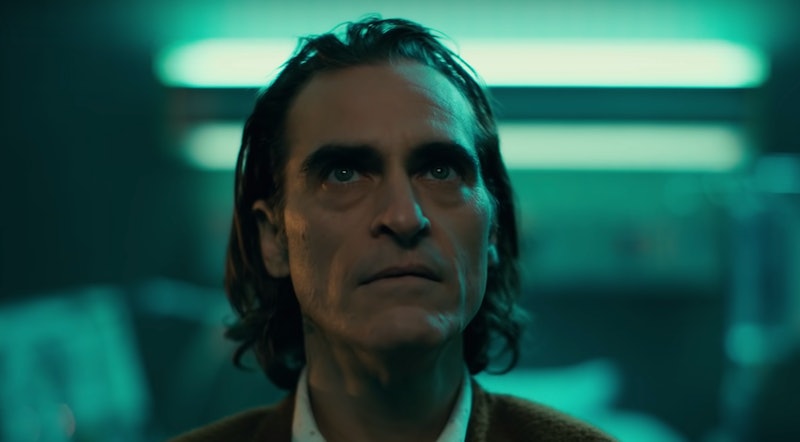 If you haven't started working your way through the Best Picture nominees for this year's Oscars, don't worry — there's still time! Even with that Feb. 9 deadline fast approaching on the horizon, you can still work your way through each of the nine nominees and still have time to settle in for the big to-do. A great place to start is with Parasite, which is one of the favorites for the big award. But right up there is another title: Todd Phillips' Joker, which is available to stream online. Here's our rundown of where to stream Joker.

Joker's a new take on Batman's arch-nemesis, exploring a new origin for the clown prince of crime. In it, Joker, previously known as Arthur Fleck (Joaquin Phoenix), is a down-on-his-luck clown-for-hire. Though he aspires to be a comedian, the world seems hellbent on taking away everything he could have to laugh about. One of the biggest highlights of the film is Phoenix's decidedly eerie portrayal of the Joker, a classically deranged character known for his instability and penchant for chaos. This origin brings a sordid kind of method to the madness, while not shying away from the brutality that lies at the heart of the character.

If that all sounds intriguing, then Joker's probably worth a watch for you. Here's the good news: Joker is fully available online to stream. Bad news: you're going to have to pay for it, as it's just not available on the regular streaming options (Netflix, Hulu, Disney+, Apple TV+). Right now, Joker is available to rent on Amazon Video ($3.99), YouTube ($5.99), Google Play ($5.99), and iTunes ($3.99). The discrepancy in prices relates to video quality — Amazon Video appears to only offer HD, while YouTube, Google Play, and iTunes each offer 4K viewings.

If you're looking to digitally purchase Joker instead, earning you the chance to stream it whenever you wanted, then you'll be ponying up a little more. It's available on Amazon Video, YouTube, Google Play, and iTunes, all for the same price: $12.99.

If you're looking for another Best Picture-nominated flick to check out on a regular subscription service — meaning, for free — there's Marriage Story, which had a limited run in theaters before making its premiere on Netflix. The Adam Driver and Scarlett Johansson-led film is attracting its own fair share of buzz, though potentially more for its leads' performances, as Driver's got the nom for Best Actor, with Johansson for Best Actress.

More like this
Here’s Where You Can Stream 'Schitt's Creek' After The Comedy Leaves Netflix
By Brad Witter
14 Women To Watch This Oscar Season
By Marina Watts
How To Stream 'Bros'
By Morgan Leigh Davies
What’s New On Netflix: Ana De Armas’ 'Blonde' & A Nick Kroll Special
By Arya Roshanian
Get Even More From Bustle — Sign Up For The Newsletter