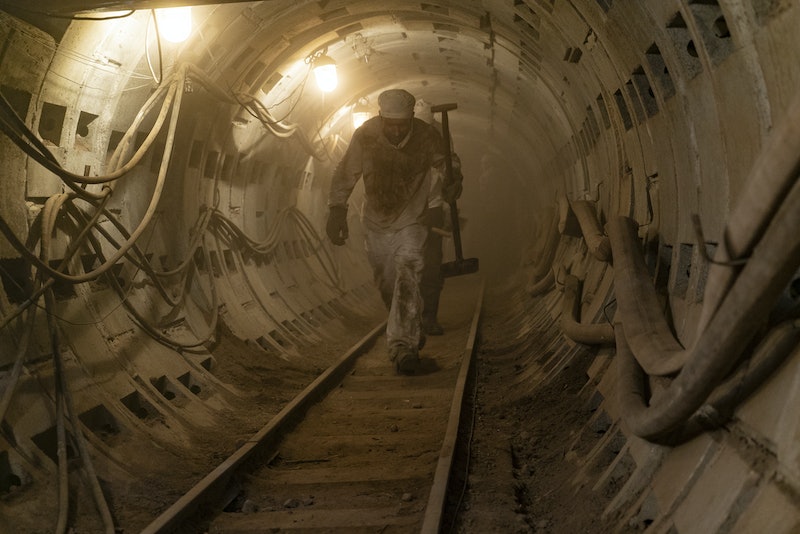 On April 26, 1986 a nuclear reactor at the Chernobyl Power Plant, in a since deserted northern Soviet Ukrainian town called Pripyat, exploded, and led directly led to the loss of 28 lives. While some of its horror has been captured in music, TV, and film, I don't think there's ever been a depiction of the terrors that occurred at that nuclear power plant so meticulous as HBO's upcoming mini series. It's realistic and devastating TV, and almost every detail seems to be on point, so where was Chernobyl filmed? The mini series looks quite a lot like some of the real life photos of Chernobyl that you may have seen so if they creep you out, this might not be the show for you.

According to HBO, 'Chernobyl' was filmed on location across Lithuania and Ukraine and, as Variety reports, the show began filming in April, 2018, somewhere in Lithuania. Principal shoots took place in a suburb somewhere just outside of the country's capital, writes Lithuanian site 15min, and according to the Irish Times, production then took place at what's been heralded as Chernobyl's sister plant Ignalia, which resides in Lithuania's Visaginas Municipality. You'll also see some scenes which take place at Chernobyl itself, according to IMDB, and other scenes which were shot 50 miles away in the Ukranian city of Kyiv.

You'll be able to catch HBO's five-part mini series (with each episode coming in at an hour long) from Tues, May 7, when it debuts on Sky Atlantic (Sky Channel 108) at the pretty dismal time of 2 a.m. — I say dismal as it is a school night, but if you're hardcore then it'll be well worth staying up for. If you're not one for a late night, then I suggest recording it right away.

If, for some reason you don't feel the full impact of HBO's Chernobyl (doubtful), and want to get even closer to the history, it may come as a surprise that you can actually visit some parts of the disaster site. According to Lonely Planet, you can travel to the Ukraine and walk through the Chernobyl ruins and some of its surrounds, with tours often starting in Kyiv. If that sounds like something you'd be interested in, then the publication recommends taking the tour with established company Chernobyl Tour. Apparently, it was founded by a former emergency worker named Sergii Mirnyi, who also originally helped to clean the post-disaster wreckage of the power plant.

That might be the very closest you can get to understanding the terror of Chernobyl, but HBO's miniseries gets just about as close as anything depiction you might have seen on the screen before. They've somehow managed to render an unimaginable horror imaginable and I, for one, am completely gripped.