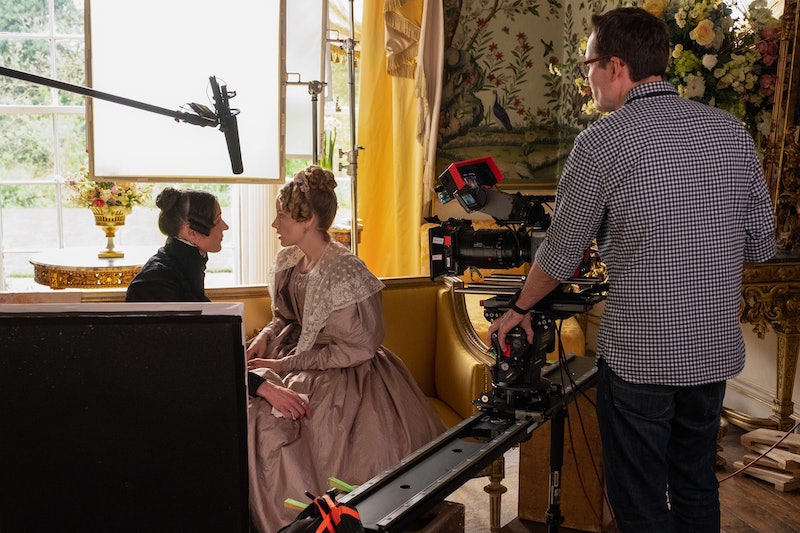 BBC's latest historical drama Gentleman Jack follows the story of the infamous landowner and industrialist, Anne Lister. The brand new series is based on the diaries of Lister, many of which were written in secret code and document the intimate details of her personal life. The drama is set in 19th century Yorkshire, and made its debut on BBC One earlier this month. But where was Gentlemen Jack filmed?

According to the Express, Gentlemen Jack did not shy away from Lister's Yorkshire roots, and most of the BBC series was filmed in Halifax, as well as the surrounding areas throughout West Yorkshire. Many scenes in the drama were filmed within Lister's ancestral home, known as Shibden Hall — a 600 year-old grade II listed building. As reported by iNews, the house was donated to Calderdale Council back in 1933, and now stands as a tourist hotspot. Other locations used throughout the filming process include Sutton Park near York, Newby Hall near Ripon, the Fairfax House museum, the Bramham estate in Leeds, Broughton Hall, the Harewood House grounds, and many more Yorkshire beauty spots.

As Screen Yorkshire reports, Gentlemen Jack producer Phil Collinson has previously discussed the privilege of filming in his home county. He said:

"As a proud Yorkshireman I was thrilled to come home to work on Gentleman Jack. This is an ambitious show filmed on location all over this glorious county. Everywhere we went we were supported and welcomed and the brilliant, mostly local crew worked tirelessly and with great skill. Screen Yorkshire too played its part in facilitating a very friendly environment for us to film in. I can’t wait to come back and do it again."

As mentioned previously, much of the BBC series was filmed in Lister's real-life family home, Shibden Hall. As reported by the Express, actor Suranne Jones, who portrays the famous industrialist in the historical drama, has opened up about the experience of filming inside Lister's actual home. She said, "It still blows my mind when I say that we filmed at Shibden. When I’m walking in Anne Lister’s footsteps, I am literally walking into her house, up her stairs, eating in her dining room, doing business deals where she did business deals, surveying the same land, and walking where she walked."

The series takes place in Halifax in 1832, and follows Lister as she returns from Hastings to her family home after learning that her lover, Vere Hobart, is now engaged to a man.

Fans of the show will be excited to learn that yesterday, May 23, the BBC confirmed that Gentleman Jack will indeed return for a second season. Piers Wenger, controller of BBC drama, described the show as a "ratings hit" in a statement sent to Bustle, while writer Sally Wainwright added:

"I'm utterly delighted that we've been recommissioned, because there are so many more big, bold stories to tell about Anne Lister and Ann Walker".

Gentlemen Jack continues every Sunday at 9 p.m. on BBC One.