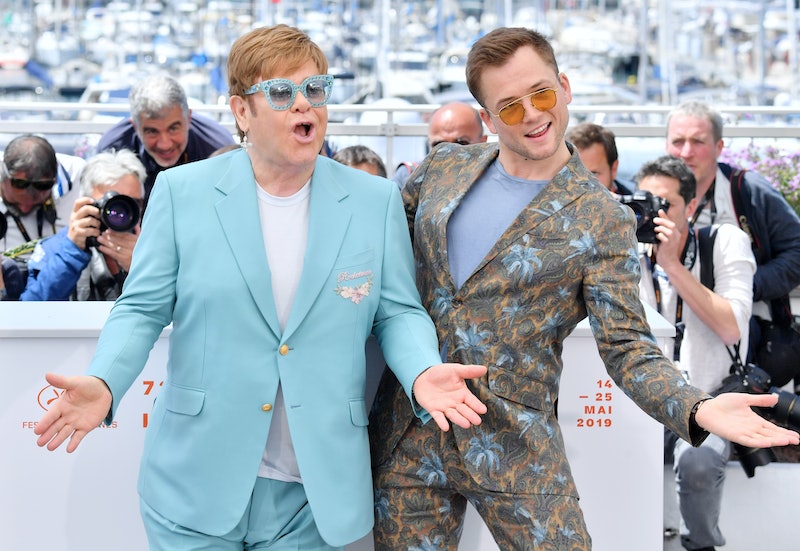 Music biopics are having a bit of a moment. The lives of some of the world's most legendary musicians are being retold on the big screen, and the public are absolutely loving it. While these biopics have previously taken a lens to the lives of musicians been and gone — Freddie Mercury and Aretha Franklin, for example — Rocketman tells the story of one of the greatest living artists. Based on the extraordinary life of an extraordinary man, the films reveals parts of Elton John that cast a new light on him. But where was Rocketman filmed? I want to know how much the film's location stays true to the places of John's life.

Now that Rocketman's currently showing in cinemas across the country, you'll get to see much of the beautiful south of England depicted on the screen, where John's spent much of his life. You'll certainly see lots of London in there, which is where Rocketman began filming, as the Express spotted on Sept. 17, 2018.

The paper papped actor Taron Egerton, who plays John, alongside Jamie Bell who plays Taupin, John's longtime co-writer, on the cobbled streets of North London, which is just one of many iconic locations you'll see in the film.

Those cobbled streets had a lot of resonance in John's own life, as filming took place more specifically in the North West London's Pinner, as the Daily Mail reported on Aug. 21, 2018, which is where John was born in 1947. The paper spotted Egerton there donning a classic John get-up, as he wore a gloriously garish fire orange jumpsuit.

But shooting didn't only take place in London. On June 8, 2018, The Knowledge Online reported that Rocketman was in preparations to film near Maidenhead at the historic Bray Studios, which has previously been affiliated with the iconic Hammer Film Productions, a studio responsible for putting out the likes of The Woman In Black. A little different from the glitter and romance of Rocketman.

As John himself wrote in the Guardian on Sunday, May 26, some of the studios "wanted to tone down the sex and drugs so the film would get a PG-13 rating." But John pushed for the raunchiness to remain, as he said: "I just haven’t led a PG-13 rated life." The star continued:

"I didn’t want a film packed with drugs and sex, but equally, everyone knows I had quite a lot of both during the 70s and 80s, so there didn’t seem to be much point in making a movie that implied that after every gig, I’d quietly gone back to my hotel room with only a glass of warm milk and the Gideon’s Bible for company."

That the film has stayed true to seemingly as many aspects of John's life as it could makes it one of the more powerful musical biopics around at the moment. So, go see it. It really is a magical testament, location and all, to the Rocket Man himself. If only they could have filmed on the moon.