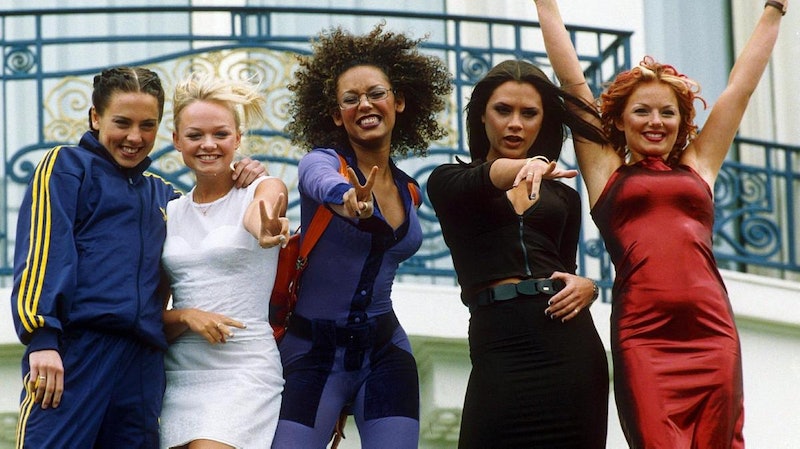 We live in uncertain and stressful times. At moments like this, people love to find an escape. Perhaps getting out into nature, taking up a new hobby, reading a good book, or listening to some relaxing tunes. I personally love a combination fo the two. More specifically, Harry Potter & The Half Blood Prince in my hands and 'Wannabe' blasting through my headphones. But that combo has got me wondering, which Hogwarts house would each of the Spice Girls be in?

OK, absolutely no shade intended, but Victoria Beckham is an out and out Slytherin. And I am saying this with the utmost love and adoration. Sure, becoming a complete fashion mega mogul with business acumen by the bucket load could definitely put her on the cusp of Ravenclaw (after all, Ravenclaws are known for their "wit, learning, and wisdom," which VB has definitely shown us over the years), but this woman is a total fashionista and — real talk — the most well dressed and glamorous people in the Harry Potter film are definitely Slytherins. Like, no competition. Can we talk about Draco Malfoy's mum Narcissa's perfectly coiffed white streak in her hair? And all those sleek robes and stunning deep greens? Honey, yes.

Mel B made leopard print fashionable in a whole new way, and introduced the "shoulder shrug" dance move, which many fans (me) still bust out sometimes (all of the time).

Since the band went their separate ways, Mel B has had some serious success a solo artist as well as on television on judging panels. However, sadly it has been her personal life that has gotten a lot of press over the years. Press that she has boldly stood up to while bossing it as a single mum. Nailing single parenthood in the face of unfair criticism? Brave AF and very Gryffindor.

Alongside her solo artist work, Emma Bunton has carved out a very successful career as in radio, working as a presenter on Heart for a number of years.

As we all know, Hufflepuffs value "hard work, patience, loyalty, and fair play." And it was once the house of Newt Scamander, author of Fantastic Beasts and Where to Find Them. Bunton's ability to knuckle down and fine a career path totally suited to her makes her a Hufflepuff for life.

Geri Halliwell broke all Spice Girls fans' hearts when she left the band. Ugh, sorry but I'm still reeling all these years later.

Since leaving the band, she had arguably one of the best solo careers. I mean, where do I start? 'Bag It Up' was an absolute tune, for one.

Yes babe. Not only did she make money moves, she also made fitness videos and totally did it on her own. And we all know that's a Ravenclaw kind of thing to do.

OK so Mel C is actually probably one of my favourites from the band for a million reasons.

She also nailed the whole solo artist thing with songs like 'I Turn To You,' which undoubtedly still fills dance floors across the globe.

But her most Slytherin aspect is her ambition and cunning (in a good way). She has not only signed up for the new Spice Girls tour, but she is also touring with some other amazing performers this summer. She will be hitting up multiple global Pride events with performers from queer power house Sink The Pink. A pretty big 'you go girl' on that.