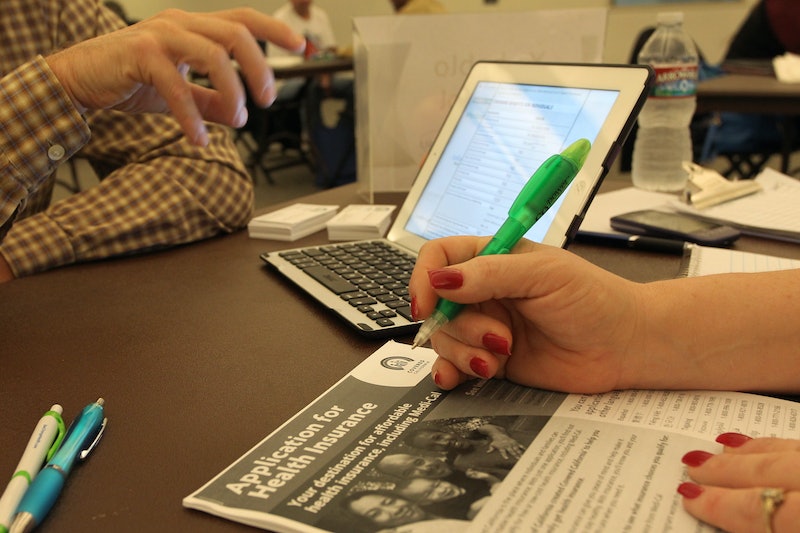 It's only week one of President Donald Trump's administration and already several anti-abortion measures have been taken by the government. In mid-January, Rep. Steven King introduced a bill that would prohibit doctors from performing abortions after a woman was about six weeks pregnant. Also, Trump himself introduced an executive order preventing American foreign aid from going to organizations that either counseled for abortion options or provided abortion services. Now, a bill passed by the Senate has been approved by the House to prevent insurance from covering an abortion. But which insurance companies cover abortion?

The answer isn't exactly a clear one. According to the Kaiser Family Foundation, there is no recent data that lists which private insurance plans include abortion. Within the Affordable Care Act, it's left up to the states to decide when abortion is covered. 25 states ban abortion coverage in state exchanges, and 10 of those states extend that to all insurance plans within the state. So, it really depends on what state you live in and if you're insured through the markets from the Affordable Care Act or private insurance through your employer.

The Washington Post described the confusion experienced by those looking to purchase through the marketplace, and how it's not immediately clear which plans offer coverage for abortion services and which ones do not. According to the Guttmatcher Institute, plans are not required to list abortion coverage in the summary of benefits when customers enroll for their plans. And according to The Huffington Post, women are supposed to be able to buy separate coverage for abortion, but it's very difficult to find.

So clearly it's difficult to get answers about abortion coverage, whether you're enrolled through a private insurance or the ACA. Complicating matters is the Hyde Amendment, which prohibits federal funding to be used for abortions. The passing of HR-7 makes the Hyde Amendment a permanent fixture in America.

Unfortunately, this bill would put much more financial pressure on those most vulnerable. Although the cost of an abortion ranges widely and may also depend on the stage of the pregnancy at the time of the procedure, the fact that insurance funds would not be able to ease the burden for women is unacceptable and scary to think about. Abortion rights are being seriously threatened by Trump and his administration, and now is the time to speak up to your legislators if you'd like to save abortion coverage for the women across the country who cannot afford it themselves.