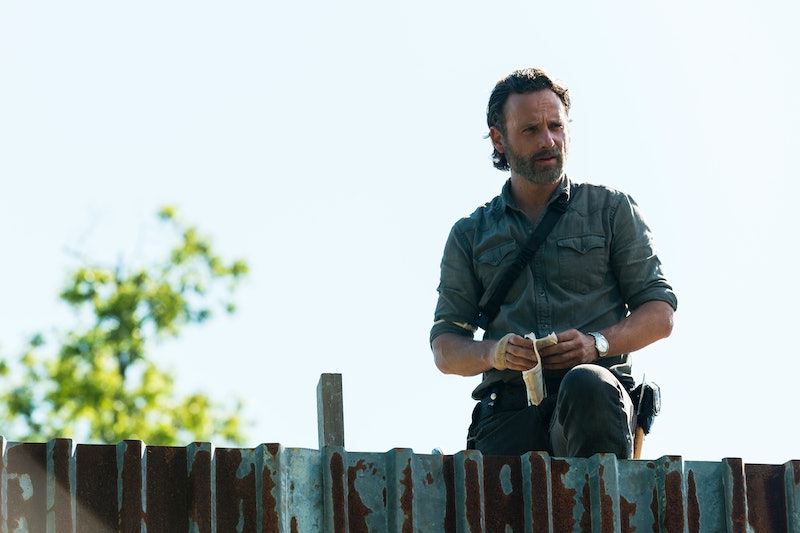 Death is a constant presence in The Walking Dead, but a recent episode of the long-running zombie series took a moment to remember two men who were instrumental in the series' success. The Walking Dead Season 8 premiere is dedicated to George Romero and John Bernecker who both passed away during the break between Season 7 and Season 8 of the series. They contributed to the show in very different ways, but obviously their loss is felt by the people who continue to make the series.

George Romero was a massive creative influence on The Walking Dead, although Romero himself never worked on the show. Many consider him to be the father of the zombie genre. Romero passed away in July of 2017 at the age of 77 after a "brief but aggressive battle with lung cancer," as reported by The Los Angeles Times.

Though he now has an episode dedicated to his memeory, Romero himself was not a fan of The Walking Dead. In fact, Romero told The Big Issue that "They [the creators of TWD] asked me to do a couple of episodes of The Walking Dead but I didn’t want to be a part of it. Basically it’s just a soap opera with a zombie occasionally." The director didn't seem to be a fan of the zombie resurgence in media as a whole. "I always used the zombie as a character for satire or a political criticism and I find that missing in what’s happening now," Romero said in the same interview.

Despite his distaste for the current state of zombies in pop culture, there's no denying that Romero is the reason it exists in the first place. His first film, Night Of The Living Dead was released in 1968. It ushered in an era of gruesome, bloody horror movies and helped introduce the world to the modern concept of zombies. His latter films, Dawn of the Dead and Day Of The Dead expanded on the concepts introduced in Night, and set the groundwork for zombies to become the most popular monster of the 21st century.

Bernecker, on the other hand, was an important figure on the set of The Walking Dead. According to The Hollywood Reporter, he tragically passed away while Season 8 was filming. Bernecker was as a stunt performer on the show, and an accident involving a 22-foot fall led to this death, also in July of this year. Deadline reported that both SAG-AFTRA (Screen Actors Guild‐American Federation of Television and Radio Artists) and OSHA (The Occupational Safety and Health Administration) opened investigations into the accident, the latter of which was projected to take six months. No conclusive findings have been released as of this article's publication. Local law enforcement ruled the fall an accident, and both the Coweta County Coroner’s office and the sheriff’s department have since closed their respective cases.

“SAG-AFTRA offers its deepest condolences to the friends and family of John Bernecker, an accomplished stunt performer who passed away after a fall on the set of The Walking Dead in Georgia. This tragic and untimely loss of a member of the SAG-AFTRA family is heartbreaking, and our thoughts are with his loved ones and his friends and colleagues in the Georgia production community. The safety of our members is paramount. We will work with the authorities and closely monitor their investigations into this tragic incident."

AMC also released a statement upon Bernecker's passing, which reads:

“John Bernecker’s family has decided that he will be removed from life support, following organ donation. We are deeply saddened by this loss and our hearts and prayers are with John’s family, friends and colleagues during this extremely difficult time.”

And The Walking Dead producer Scott Gimple made a public statement as well, saying:

“Our production is heartbroken by the tragic loss of John Bernecker. John’s work on The Walking Dead and dozens of other movies and shows will continue to entertain and excite audiences for generations. We are grateful for his contributions, and all of us send our condolences, love, and prayers to John’s family and friends.”

According to the aforementioned THR article, Bernecker had amassed 93 stunt credits in just 10 years of work. Recent projects include Black Panther, Get Out, and Logan. Bernecker was 33 when he passed away.

Though the show has a complicated relationship with Romero and the death of Bernecker has prompted inquiries into on-set safety, this dedication lets the audience know that the show would not have happened if it was not for the life's work of these two men.

More like this
Glenda Cleveland Died 2 Decades After Trying To Turn In Neighbor Jeffery Dahmer
By Brad Witter
'Elite' Season 6 Is Arriving Sooner Than You Think
By Gretchen Smail and Grace Wehniainen
The ‘You’ Season 4 First Look Shows Joe’s New Identity And Potential Victims
By Bustle Editors
The ‘Emily In Paris’ Season 3 Release Date Is Here, Plus The First Footage
By Bustle Staff
Get Even More From Bustle — Sign Up For The Newsletter