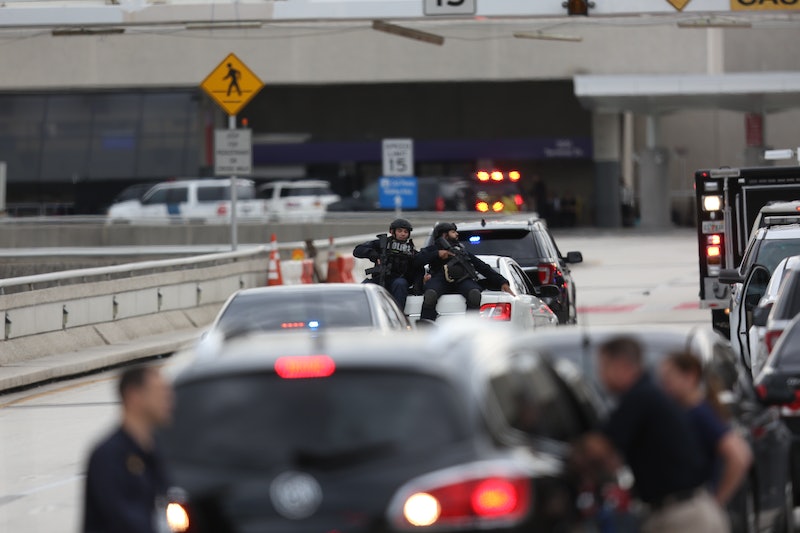 On Friday, a gunman open-fired at Fort Lauderdale-Hollywood International Airport, killing five and injuring eight more. The suspect reportedly surrendered without incident and is now in the custody of law enforcement, but other than that, details on the incident are still scant. So, who are the Ft. Lauderdale airport shooting victims? Update: The victims have been identified as Mary Louise Amzibel, Shirley Wells Timmons, Michael John Oehme, Olga M. Woltering, and Terry Michael Andres.

Earlier: That's still unclear. While law enforcement did identify the suspected shooter, they haven't released the names of any of the victims yet.

We do have some details on the victims' conditions, though. Five died of their wounds, but the eight who survived are reportedly in stable condition, according to CNN. Two of them underwent surgery after the shooting, and five were reportedly being treated for trauma.

The shooting took place at the baggage claim of Terminal 2 and was first reported at 12:55 p.m. local time, the Broward County Sheriff said on Twitter. According to Broward County Commissioner Chip LaMaraca, the shooter arrived at the Florida airport on a flight, and had kept his gun in checked baggage, not a carry-on bag. One witness told WGNTV that the shooter he went to bathroom to retrieve the weapon from his bag before open-firing on travelers, while law enforcement sources told CNN that he removed the weapon from his bag at the baggage claim itself.

The airport was evacuated, and as of this writing, it remains closed to all departing and arriving flights. The FAA issued a nationwide "ground stop" on all arriving flights, meaning that flights scheduled to land at Fort Lauderdale are being held on the ground at their airports of origin.

Initially, there had been reports of a second shooting at the airport shortly after the first. However, these turned out to be unfounded, and authorities currently believe that the shooter acted alone.

“We cannot and will not tolerate this type of violence in Florida," Rick Scott, the state's governor, said after the shooting. "We will not stand for this and the person responsible will be brought to justice to the absolute fullest extent of the law. When you hurt one of us – you hurt all of us."

Scott said that after the shooting, he didn't reach out to President Obama; instead, he called President-elect Donald Trump. Although Trump is a civilian with no access to federal resources, Scott nevertheless said that Trump offered to help procure "whatever resources [Florida] needs from the federal government."