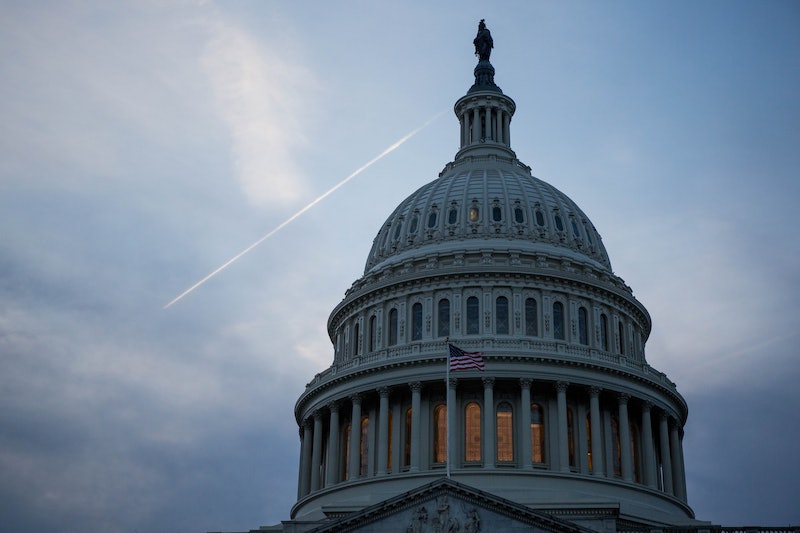 As President-elect Donald Trump prepares to take the oath of office, the other festivities which traditionally accompany Inauguration Day aren't quite coalescing as planned. Between performers being forced to attend or else risk losing their jobs and area schools refusing to enlist their marching bands for the parade, the campaign is having trouble locking down appearances. But who are the inauguration speakers in 2017? Unsurprisingly, they have yet to be confirmed.

We do, however, have an idea of the day's events, as well as confirmation of certain figures who will be in attendance. The day will begin with the customary morning worship service, followed by a procession to the Capitol. Traditionally, the outgoing president accompanies the president-elect for this portion of the day, so we can assume that President Obama will be in attendance.

Afterwards, first the vice president, then the president, have their swearing-in ceremonies on the West Front of the Capitol building. The new president then gives an inaugural address, after which he attends the inaugural luncheon, inaugural parade, and the evening's inaugural balls. While President Obama and First Lady Michelle Obama attended nine balls after his inauguration in 2009, President-elect and Melania Trump are reportedly only attending three.

Following rumors that no former presidents would attend the Trump inauguration, it has now been confirmed that Bill and Hillary Clinton will be in attendance, as well as George W. and Laura Bush, and Jimmy Carter.

The only speakers who have been confirmed thus far are Inauguration Day religious leaders, who will be reading from scripture and leading prayers. One or two clergy are common at inaugurations, but Donald Trump has chosen an unusually high number to represent him. While President Obama opted for three leaders of faith, Trump has chosen six to offer readings and prayers on his Inauguration Day.

Among them is Pastor Paula White, one of Trump's top spiritual advisors, who was responsible for facilitating a meeting between him and hundreds of evangelical leaders. She is only the second woman ever to pray at an inauguration. The first was Myrlie Evers-Williams in 2013. The other leaders slated to speak are Cardinal Timothy Dolan, Rev. Franklin Graham, Rabbi Marvin Hier, Bishop Wayne T. Jackson, and Rev. Samuel Rodriguez. And they weren't all Trump supporters — Rodriguez, Dolan, and Hier were all vocal opponents of Trump's immigration policies and his rhetoric on immigrants.

Deputy Communications Director for the Presidential Inaugural Committee Alex Stroman told NBC Washington that a truncated Inauguration Day parade was expected, chalking it up to Trump's supposed wish to skip the formalities. "You're going to see a shorter parade this year, probably about an hour and a half or so," he said. "That's probably a testament to this president's willingness and eagerness to get to work for the American people."

POLITICO has a full list of the parade lineup, which the organizing committee says will include "8,000 parade participants representing 40 organizations" and every branch of the military. They'll also be hosting a livestream of the inauguration, which you can watch here.