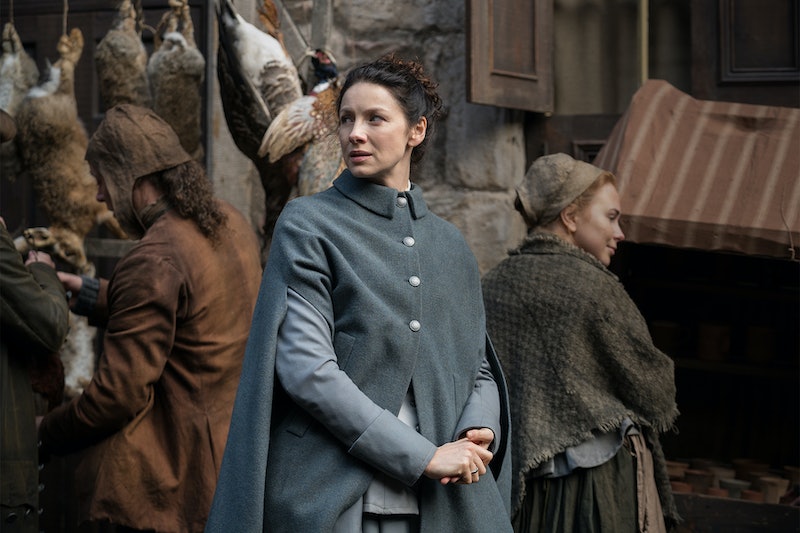 Jamie and Claire's reunion on Outlander was long-awaited, but it unfortunately couldn't be all about romance. Spoilers for the episode "A. Malcolm" follow. After Jamie leaves Claire to attend to some business, a man attacks Claire on Outlander during the final moments of the Oct. 22. episode. The assault is a startlingly change in tone from the rest of the episode, which mostly focuses on Claire and Jamie getting to know one another again. However, it foreshadows how Jamie's way of life will continue to be dangerous for Claire even 20 years after the Jacobite rebellion.

Claire shares a night of passion with Jamie and in the morning, she eats breakfast with the prostitutes at the brothel where Jamie lives now. But when she returns to the room, she finds a bald man with dark eyebrows going through Jamie's things. She asks the man who he is, but his reply is less than helpful since he says, "None of your concern." He assumes Claire is a prostitute and says once he finds Jamie's ledgers, he will have sex with her. When Claire says she has no idea where they are — and that she's not a prostitute but Jamie's wife — the man threatens to rape her, leading to another, far less happy, cliffhanger ending to an episode.

While Jamie's public profession is a printer, it's with quite a bit of prodding — guessing that he is involved in everything from highway robbery to piracy — that Claire eventually gets Jamie to confess that he's also a smuggler of liquor. That doesn't mean his printing job is without risks since he admits that he was arrested six times for sedition in the past two years and he had his premises seized twice. He said the court wasn't able to prove anything, but if they could, he would likely be hanged. Since Jamie has distributed treasonous papers, as shown in the beginning of the episode, that means the law has every right to be suspicious of him and Claire is still married to a wanted man.

Yet, the man who attacks Claire is probably not there about Jamie's printing business, but there because of Jamie's smuggling. Not many clues are given about the attacker's identity, but one hint may be Jamie's shady tavern meeting with a British taxman earlier in the episode. That taxman appears to be in the know about Jamie's smuggling and is demanding that Jamie pay him more money. So it's quite possible that the taxman sent the bald man to the brothel to find evidence of where Jamie is smuggling liquor or to collect the extra money that Jamie refused to give.

Book spoilers follow, so skip to the next paragraph if you'd rather not know. In the Diana Gabaldon book that Season 3 is based on, Voyager, the man at the brothel is indeed an exciseman, as the site Outlander Lists and Timelines notes. If you're unfamiliar with the term, the Oxford Dictionaries describes it is "an official responsible for collecting excise duty and preventing infringement of the excise laws (especially by smuggling)" — aka a person who collects taxes and enforces laws against smuggling.

Still, even if the TV series doesn't follow the book when it comes to the attacker's identity, Claire has found herself in a perilous situation due to Jamie's entanglements yet again. And it can only be interpreted that there will be plenty more of this to come. Although Claire says that Jamie won't lose her unless he does something immoral, it seems she will be tested sooner rather than later when it comes to standing by him.

Based on a conversation that Jamie has with a grown-up Fergus, Claire being tested will most likely prove true not just when it comes to Jamie's professional life, but his personal life as well. Fergus hints at a personal issue that could impact Jamie's relationship with Claire and Jamie says he will need to consult the law. Book readers know what Fergus is referencing, but TV viewers will have to wait and see what else Jamie has been up to that could potentially hurt Claire.

As for the attacker, there's no real fear that he will kill Claire, but there is cause for concern that he will sexually abuse her. So although Claire's reunion with Jamie is everything fans wanted and more, the ending of "A. Malcolm" reminds viewers that Jamie and Claire's lives together will be far from perfect in the 1700s. While it's not really Jamie's fault, Claire doesn't deserve to be put in danger — even if it is unintentional. So although she is prepared to stay with Jamie for the long haul, Claire will need to make it known that this kind of life isn't acceptable — just as soon as she manages to free herself from the lecherous mystery attacker.