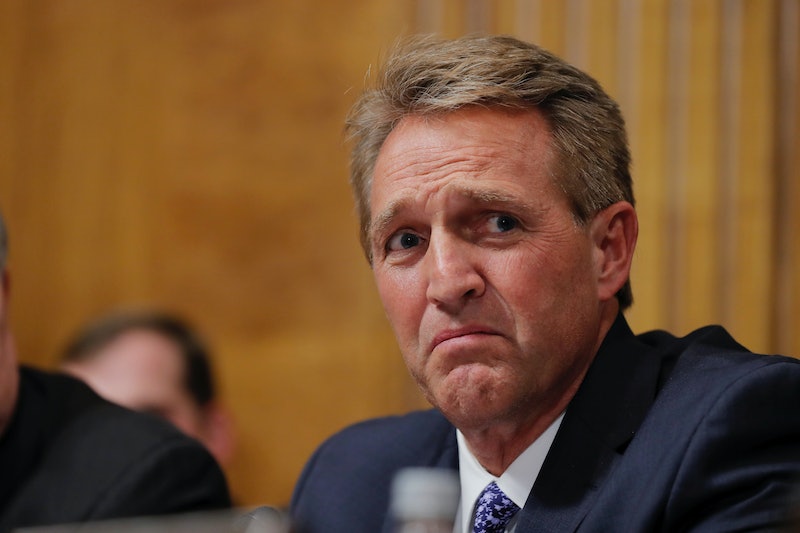 In a dramatic moment during the Senate Judiciary Committee's vote to move Kavanaugh's nomination to the full Senate floor on Friday, Sen. Jeff Flake (R-Ariz.) requested that the full Senate vote be delayed up to a week so that an FBI investigation can happen. The committee, with Flake's vote, ultimately approved moving Kavanaugh's nomination to the full Senate, but Flake indicated that his vote on the Senate floor will be determined by whether or not an FBI investigation happens.

The FBI has already done a background check on Kavanaugh, but it did not include the Ford allegation. Democrats — and Ford — have been calling for the FBI to reopen their investigation on Kavanaugh to look into the allegations. Bustle has reached out to the FBI and the White House for comment.

Although Trump is the only one with the literal authority to open the FBI investigation, if enough Republican senators come out in support of an investigation, he might not have much of a choice. The Senate is composed of 51 Republicans; if all Democrats and at least two Republicans vote against Kavanaugh's confirmation, he won't make it onto the court — and Trump ostensibly does not want that to happen.

In his call for a delay, Flake essentially said that his vote depends on if an FBI investigation happens, so Trump would likely be compelled to open one to assuage the concerns of Republicans who would possibly vote against Kavanaugh (Republican Sens. Lisa Murkowski and Susan Collins are also being closely watched, and Murkowski has said she supports Flake's call, according to NBC reporter Leigh Ann Caldwell).

Shortly after Flake made his request on Friday, Trump responded to the news by saying he was still learning exactly what was going on, but he would be leaving it up to the Senate. "I'm going to let the Senate handle that; they'll make their decisions," he said. With that, it stands to reason that if top senators ask Trump to ask for an FBI investigation, he will agree.

Should an investigation move forward, as Kavanaugh and senators repeatedly pointed out on Thursday, it would not make a definitive conclusion on Ford's claim. Instead, it would look into evidence, interview witnesses, and do other research into the allegation. The FBI would then present that information to be considered by the Senate. The FBI did investigate Anita Hill's allegation in 1991, and it took three days.

During the hearing on Thursday, five Democratic senators — Amy Klobuchar, Kamala Harris, Dick Durbin, Dianne Feinstein, and Richard Blumenthal — asked Kavanaugh if he supports an FBI investigation, given that he denies Ford's allegation. Repeatedly, Kavanaugh dodged giving a direct answer. However, ultimately, it's not up to Kavanaugh. Now, it hinges on whether senators pressure Trump enough to open it up.