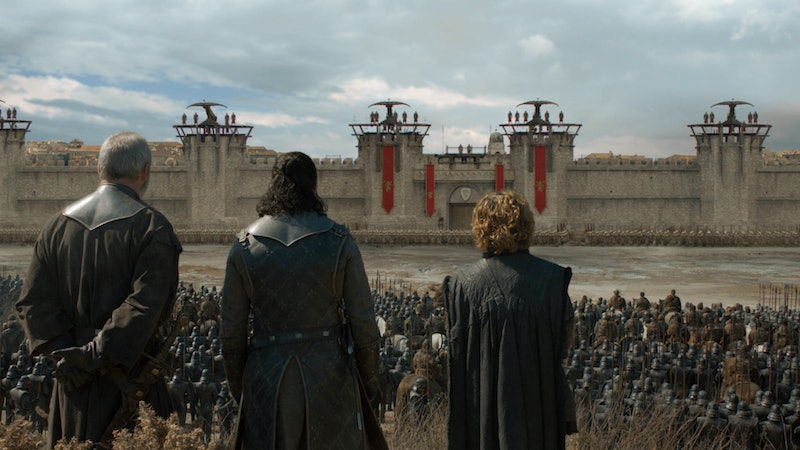 The Great War may be over, but the Last War is still looming. Daenerys and Jon (and, crucially, Arya) defeated the Night King at the Battle of Winterfell, but now the fight comes to the capital. Who will destroy King's Landing on Game Of Thrones? The obliteration of the city seems like a foregone conclusion with so many powerful forces fighting for its control. But the question remains: who still strike the match that lights it up and burns it down?

As the penultimate episode of the show's final season begins, the sheer number of factions amassing on the city is staggering: Jon and his Northern army coming down the King's Road, Dany and her remaining dragon and Unsullied forces regrouping on Dragonstone, Cersei and her Golden Company manning the walls, and Euron and his Iron Fleet (and their giant crossbows) patrolling Blackwater Bay — and that's not even including potential surprise arrivals from the likes of Yara Greyjoy and her own fleet by sea, or the unnamed Prince of Dorne and his own army from the South.

As well-defended as it is, surely King's Landing doesn't stand a chance of withstanding the impending battle. The city's destruction has been teased as far back as Season 2, in perhaps one of the show's biggest remaining dangling plot threads: Dany's vision in the House of the Undying.

After the warlocks of Qarth kidnapped her dragons, Dany as forced to enter their lair to rescue her children. While searching for Drogon, Rhaegal (RIP), and Viserion (RIP), Dany stumbled through a series of tableaus, including a peek beyond the Wall, a brief reunion with Khal Drogo (RIP)… and a trip through the throne room of the Red Keep, seemingly decimated by some apocalyptic conflict.

For years, fans have assumed that the white flakes falling through the ruined ceiling and onto the Iron Throne was snow, either literally representing the arrival of winter, or metaphorically teasing that Jon (Snow) would end up on the throne. But the Night King is defeated, never having made it farther south than Winterfell. With his death, winter seems to be receding; while the Season 7 finale showed the first flakes of snow falling on King's Landing, the capital seemed rather dry and hot when Dany and her forces arrived there in "The Last Of The Starks." If winter is receding with the Night King's defeat, then what's with the snow in Dany's vision?

Well, what if it was never snow at all… but rather ash? What if Dany's vision was warning that King's Landing would end in fire, rather than ice? If that's the case, then there are obviously two prime suspects: Dany and her dragon, and Cersei and her wildfire. But which one will ultimately be responsible for the conflagration?

Dany was initially hesitant to bring the fight directly to King's Landing, not wanting to be responsible for the death of its innocent civilians. But with Missandei's execution at the end of the fifth episode — and her best friend's fiery final word, "Dracarys" — it appears that Cersei may have pushed the dragon queen over the edge. Dany appears poised to throw caution to the wind and bring the "fire and blood" promised by her family's motto to the capital.

But Cersei is equally as desperate as Dany, and she still has vast caches of wildfire spread throughout the tunnels and crypts of King's Landing, even after she used some to blow up the Sept of Baelor in the Season 6 finale. If Cersei feels like she's on the verge of losing the battle, she could very likely pull a Mad King Aerys and "burn them all" by igniting the remaining wildfire, burning King's Landing down rather than letting Dany take it from her.

So who will ultimately be responsible for the destruction, Dany or Cersei? Game Of Thrones tends to go for the most tragic, Shakespearean twist, so the answer will probably be: both of them. If Cersei surrounds the Red Keep with wildfire — and if Daenerys targets the Red Keep with dragonfire — it seems likely that the two substances will meet to disastrous consequences. Dany might be the one to inadvertently light Cersei's wildfire, thus destroying the city she intends to rule.

Keep in mind that the show has given Dany a power she doesn't possess in the books: she's fireproof. On the page, her invulnerability to fire was a one-off event brought on by the magical circumstances of Drogo's funeral pyre. On the show, this was changed to all Targaryens being fireproof, and Dany has proved able to withstand flames multiple times, including when she burned down the great temple of Vaes Dothrak and all the khals inside it.

Why did the showrunners give her this power? If all of King's Landing does go up in flames, once the fire burns down, the fireproof Daenerys would be the only living person left standing amidst the smoldering wreckage. She would become the literal "Queen of Ashes" — exactly what she said she didn't want to be when she arrived in Westeros in Season 7. How's that for a tragic, Shakespearean twist?