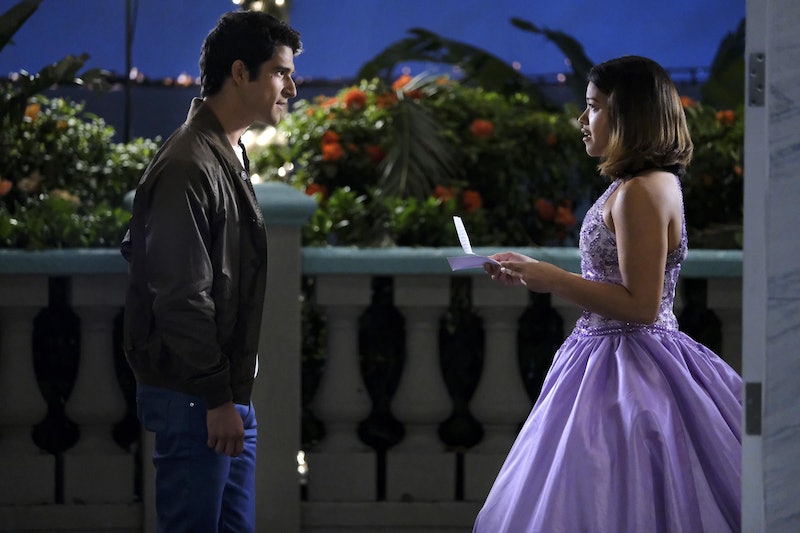 Spoilers for Season 3 of Jane The Virgin ahead. Hearts of fans everywhere were shattered into a million pieces when Jane the Virgin killed off Jane’s new husband Michael in the middle of Season 3. After a three-year time jump allowing Jane (and viewers) to mourn the devastating loss, The CW telenovela whisked the titular heroine back into the dating scene with a handful of attractive, but severely mismatched beaus. In the second half of Season 3 Jane tried casual flings, but ultimately came to realize that they are not her cup of tea. She’s ready to open her heart again to real, true love when Jane the Virgin returns for Season 4 on Oct. 13. And the lucky guy might just be none other than Jane's first love Adam (Tyler Posey).

When we last saw Jane she had just finished officiating her parents’ wedding. Earlier in the episode she had desperately been trying to find a letter Father Gustavo mentioned Michael wrote on the eve of he and Jane’s wedding. Alba knew about it too, but much like Jane, had no idea where Michael stashed it. Jane grew desperate to find it and returned to her old apartment to search beneath the floorboards, remembering Mateo used to stash things down there. The current tenants agreed to the search, but nothing turned up.

Disappointed, Jane returned back to the wedding. After the ceremony was all said and done, she learned that someone found the letter. While reading it Jane teared up thinking about the love she and Michael shared, and also about her next steps. She runs out of the building to find Rafael, ready to confess her renewed feelings to him, but instead ran smack into Adam, played by Tyler Posey. Turns out he’s the one who found the letter, as he lived in the apartment before its current household.

According to what series creator and show runner Jennie Snyder Urman told Variety, Adam’s presence will bring good vibes to Jane this season. “He brings a totally different energy to the men we’ve had on ‘Jane.’ He has a more youthful energy, he’s a less planned person,” Urman said. “He’s at a different point in his career. He has roommates, he’s living a much more 20-something life, whereas Jane, after she was accidentally inseminated, had to grow up quickly and make real life decisions very quickly. Part of his energy is reminding Jane she’s only 28 years old and she still has a lot of youth let in her.”

So is this the beginning of yet another love triangle on Jane The Virgin? Most definitely. With Adam back in Jane’s life just as she was starting to catch feelings for Rafael (again), things are sure to get interesting. In a recent trailer for the upcoming premiere, a jealous Petra asks Jane if she is 100 percent over Rafael. Fans already know the answer to that question. Jane responds that a hundred percent is a big number as she looks at Rafael. This could mean that she is not totally past the idea of being with him again. While this all went down, Rafael sat there silently and looking longingly at Jane. He’s obviously in love with her. Sigh.

In the other corner of the ring fighting for Jane's heart is Adam. He's the first person Jane fell in love with, the same age as her, and an illustrator of comic books and graphic novels. But besides that, not much else is known about his character thus far. Right now it's unknown just how long Adam will be around Miami, but he’s listed as a recurring character this season, which means he’s not going anywhere anytime soon. And from the looks of it, Jane isn't too upset about that. When she gazed up into his eyes during the season finale Jane looked rather happy to see Adam, versus the normal “WTF” look most people have on their face when they randomly run into their ex. Maybe Adam's the guy she's been waiting for ever since Michael died. But, regardless of who Jane chooses this season — Rafael or Adam or even someone else — one thing is clear: she’s definitely getting her happily ever after back.

So what is Rafael going to do when he finds out about Adam? And just how will Adam fit into Jane’s twenty-something, single mama world? Find out when the soap opera-esque antics of Jane The Virgin return on Friday, Oct. 13.