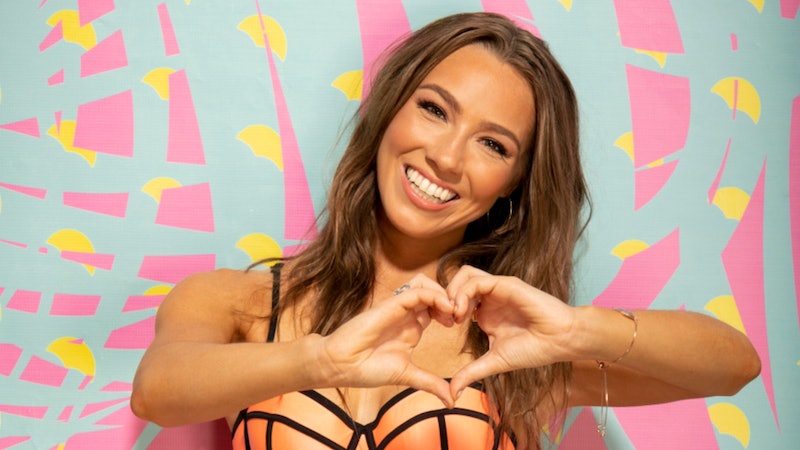 The U.S. version of British dating show Love Island starts airing on Tuesday night, and it's time to start getting familiar with the stars. The show, like the UK version, airs five nights a week, which can make it hard to keep up. Luckily, that's just how Alexandra Stewart from Love Island likes it. The Los Angeles-based publicist is confident, bubbly, and ready to find a special someone who's just as high-powered as she is.

Alexandra's CBS bio reveals that she's recently recovered from heartbreak — and come back stronger than ever. Her last relationship was "a rocky three years," after which Alexandra "took some time to find herself." It seems that time was effectively spent. Now, Alexandra has this to say about her future: "I know who I am and am ready to find someone who is serious about dating." Let's hope the Love Island men are bringing similar energy to the table — as well as a lot of tattoos, since she says she finds them sexy.

A Pennsylvania native, Alexandra says she grew up playing ice and field hockey when she was younger, and finds she can "connect with the boys while watching football." But she's not a "guy's girl" by any means: the 25-year-old is equally at home "making friends with random ladies" at the club, and lists white wine, smelly cheeses, and Taylor Swift among her favorite things. She's very outgoing and likes to connect with people over a variety of interests, which is a trait that will likely serve her well in the Love Island house.

Alexandra may be from the Northeast, but she's certainly adapted to the Los Angeles life. According to her Instagram, she loves being in bathing suits year round, whether she's at the beach, the pool, or on an impromptu trip to Miami. Her love of sports shines through too: she's frequently pictured watching and attending football games, and seems to own several jerseys.

While Alexandra's career is listed as publicist on CBS, her Instagram suggests she dabbles in modeling as well — perhaps on an amateur level for now, but Love Island could result in an offer to do so professionally. She seems to have a close crew of girlfriends (or at least an Instagram community of them) supporting her creative endeavors and flooding her pictures with compliments and inside jokes. At a little over 6.5 thousand followers, Alexandra isn't quite an Insta celeb yet, but she's got all the makings of a successful influencer in place.

Per CBS, Alexandra's motto in life is, "Don't adapt to the energy in the room, influence the energy in the room," which could hint at how she'll approach Love Island. Judging from that, she's sure to be a leader in the house, and will likely try to set the tone for the group early on. But given that reality TV is full of dominant personalities like this, she may end up sparking some conflict — especially if someone gets between her and her shot at love.

More like this
'Love Island' Has Added Yet Another Bombshell To The Villa
By Bustle UK
Twitter Is Saying The Same Thing About 'Love Island'
By Sophie McEvoy
This Pre-'Love Island' Video Of Olivia & Zara Together Changes Everything
By Bustle UK
Love Island’s Latest Winter Season Finally Has A US Release Date
By Grace Wehniainen
Get Even More From Bustle — Sign Up For The Newsletter
From hair trends to relationship advice, our daily newsletter has everything you need to sound like a person who’s on TikTok, even if you aren’t.