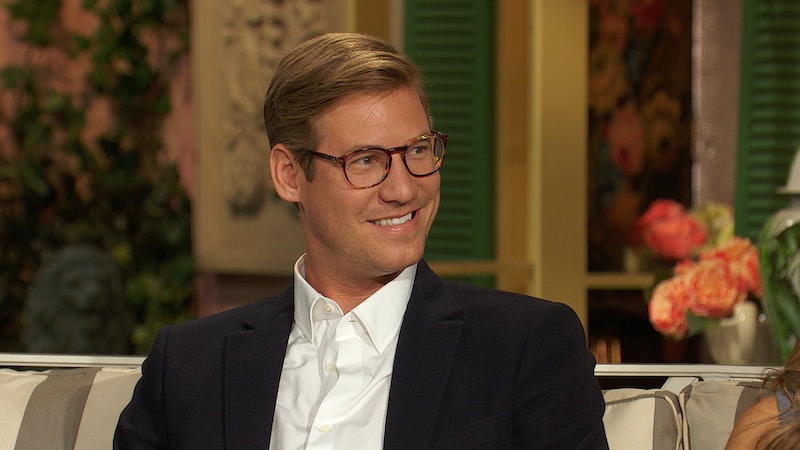 Relationships are complicated on Southern Charm and everyone in the cast has seemingly hooked up with each other at least once. That's why it's important to date outside the group — it keeps things way more civil. Or at least one should hope so. However Austen's new girlfriend on Southern Charm, Madison LeCroy, might have some drama of her own this season, given that her introduction to fans was a little messy.

Season 5 of Southern Charm was all about Austen's relationships with Chelsea and Victoria, but coming into Season 6, there's a new woman woman in his life. Her name is Madison, according to Bravo, and she's a Charleston-based hairdresser that goes way, way back with Patricia Altschul and Naomie Olindo. If you're in with those two, it means you're pretty cool or you're really good to hang out with at parties. And if Patricia lets Madison do her hair, man — Madison is in. Those women can be picky.

She and Austen have been dating since 2018. As to how they met, Madison's LinkedIn says that she did hair and makeup for Southern Charm during the show's first four seasons, so that seems like an easy meet cute for the new couple. She also owns her own salon in Charleston called Blush & Brushes and she's a mom to a six-year-old son. So she definitely has a lot going on in her life.

Austen and Madison have been photographed with each other for over a year now, but they suffered a major blow to their relationship when Austen was allegedly caught cheating on Madison with two women. According to footage that will air on Bravo, Madison showed up to his apartment to find the women in bed with him, or at least, that's that the caught-on-video altercation seems to suggest.

It wasn't a pretty sight, watching this very private moment published on the Internet, but Madison insisted via an Instagram comment to a fan that she and Austen were working through it. “Like every relationship — we have went through a few bumps in the road to get where we are now. A video taken several months ago, while we weren’t in a relationship is showing one side of a story, this will not tear us apart," she said. "We chose to forgive, forget and move forward with a fresh start.”

So long as Madison and Austen have worked on their relationship and determined what is correct and right for them, that's all that matters. Madison has been around the Southern Charm cast for a few years now, so not only does she know the cast members well, but she knows their patterns and their dramas intensely.

Hopefully, working on the show allowed Madison the time to get to know Austen well enough before they brought things public, because once you're out in the public eye, you can't put the genie back in the bottle! These two are adorable, frankly, and fans will be glad to watch their relationship unfold on Southern Charm Season 6.

More like this
‘The Ultimatum: Queer Love’ Is Officially On The Way
By Radhika Menon and Kadin Burnett
Here’s When You Can Expect More ‘Indian Matchmaking’
By Brad Witter
Clayton & Susie Broke Up, Citing "A Significant Amount Of Pain" After 'The Bachelor'
By Jordyn Tilchen
Kendall Jenner Thinks Tristan Thompson "Wanted To Trap" Khloé With Another Baby
By Jake Viswanath
Get Even More From Bustle — Sign Up For The Newsletter