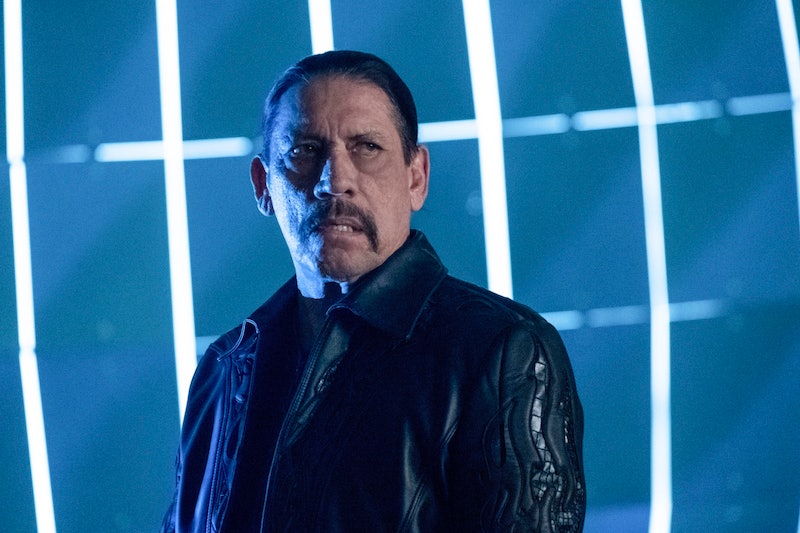 Cisco Ramon and Gypsy have turned The Flash into an interdimensional love story about two metahumans just trying to make it work in this crazy universe. But Gypsy's dad Breacher is coming to The Flash in the Oct. 31 episode, and may cause some mayhem for the lovebirds. Cisco has fought pretty hard for Gypsy, but he'll be tested like never before.

Remember that Cisco and Gypsy met as enemies back in Season 3, with Gypsy trying to capture Harrison Wells and bring him back to face justice on Earth-19. Cisco tried to stop her. Despite meeting in battle, the two have always had romantic vibes (they both have vibe powers too) and a loving relationship developed. Breacher may have something to say about it, however.

Breacher, like many characters on The Flash, has origins in the comics. Breacher can project energy and teleport, just like his daughter. Gypsy is also Breacher's daughter in the comics, so perhaps Cisco should have prepared to meet some tough relatives after falling for this badass woman. Her dad first appeared in Justice League Of America's Vibe #3, in June of 2013. While DC comics can provide clues about Breacher, the show as always will take creative license to make their characters what they want.

Jessica Camacho, the actor who plays Gypsy, spoke to Collider about her role and the addition of Breacher, played by Danny Trejo. Camacho told the site that the dynamic between Breacher and Cisco will be fun, and that her metahuman dad won't be able to resist challenging her new man. She said:

"[Danny Trejo] will not let the audience down. He is so great in this role. He comes in when Cisco and I are just totally vibing and are wrapped up in our feelings for one another. Everything is great and we’re in this great place, and here comes my daddy, who’s not having Cisco hanging out with his daughter...[Breacher] is like, 'Okay, we’ll see what you’ve got!,' and decides to put him to a very, very intense test. "

Watching Cisco pursue his powerful girlfriend has already been super enjoyable, and adding in an intimidating father should raise the stakes in the best way. Though, hopefully Breacher realizes that Gypsy needs to make the call about who she wants to date in the end.

But first, let's think about how this face-off might go down. Cisco has become increasingly powerful since he first got his vibe powers: he can send vibrational blasts, travel between dimension and even can perceive or "vibe" events across dimensions. Still, his powers take focus, his special vibe goggles, and quite a bit of effort. Breacher has the potential to be a more seasoned metahuman with similar powers, a potential problem for the team but also a preview into what Cisco's powers could become. That's the beauty of The Flash, the foes often challenge and push the heroes to become more powerful.

As reported by TV Guide, Carlos Valdes, who plays Cisco, teased at San Diego Comic-Con that Gypsy will be Cisco's main focus this season. Valdes said:

Cisco and Gypsy's relationship has played out like The Flash's version of a romantic comedy. In episode 3 of Season 4, "Luck Be A Lady," Cisco missed Earth-19's version of Valentine's Day because he was working too much, which upset Gypsy. This very normal relationship bump was translated into Flash-appropriate drama, something that is about to happen again when Cisco meets Gypsy's dad.