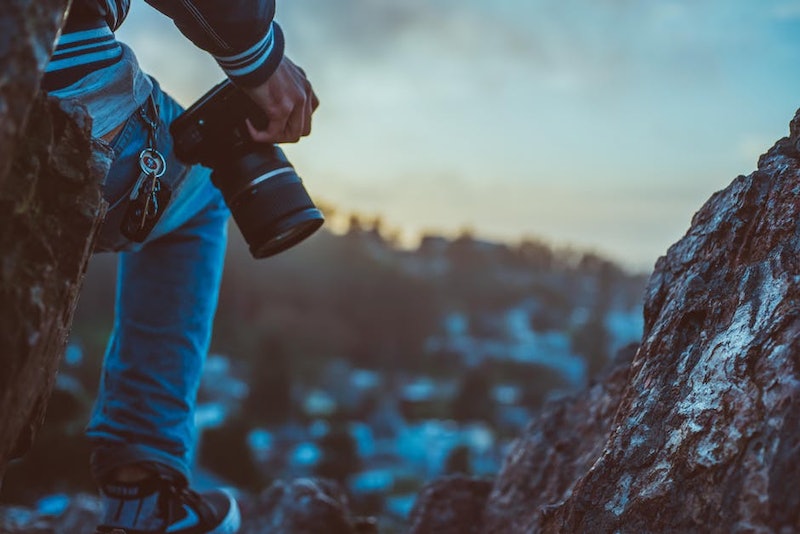 Age is just a number. I used to think this was something we told ourselves so we didn't feel so bad about getting old and crusty; then I heard about ChuanDo Tan, who I'm pretty sure invented the popular cliche. The professional photographer is allegedly 50 years old, except he looks like he's in his 20s. The interwebs are confused, to say the least, as the man has clearly defied Father Time; and, I might add, he is rather pleasing to the eye. But I'm an engaged woman, so I'll refrain from talking about how uncomfortably attractive I find him.

Tan apparently used to be a model (give me a second while I put on my surprised face) but now spends his time behind the camera. His Instagram page features his professional work as a photographer, plus the adorable candid here and there, and the occasional selfie. These are no run-of-the mill selfies, though, because the supposed 50-year-old dons washboard abs, nerdy/sexy glasses, and an impeccable sense of style. And don’t get me started on his arms. Where’s the gun show, sir?

Look for yourself — does this man honestly appear to be 50 years old? No. The answer is no. Observe and be amazed.

This last pic is my favorite, because I like to pretend he's picking me up for our first date.

Are you as baffled as I am? Good. If you're stunned by Tan's youthful appearance, you're not alone. The internet is blown away by the age-defying photographer/totally in love, and some of the reactions have been pretty entertaining.

This isn't just a case of a man "looking good for his age." He doesn't look anywhere close to his age at all! How does he do it? According to other media outlets, Tan says he stays young by working out regularly, not bathing late at night or early in the morning, and eating lots of Hainan chicken. Personally, I think he must be an alien inhabiting the body of a 25-year-old, but that's just me. I eat plenty of chicken and wear SPF 500 and I still don't look that young.

According to the Straits Times, Tan used to be one of Singapore's more sought-after models back in the late '80s and early '90s — you know, when a lot of us were busy being born. He supposedly had a short-lived gig as a pop singer and then reemerged as a celeb photographer in the mid '90s. He started his photography business with his good friend Frey Ow, and together they are ChuanDo & Frey. Their work has been featured in Elle and Harper's Bazaar, and he even shot Janet Jackson's album cover for Discipline back in 2008.

Good-looking and talented? Stahp. Seriously, though — his work is no joke.

Tan largely remains a man of mystery. I haven't been able to find any interviews online, and I stopped leaving him comments and messages on social media because I'm scared he's going to report me for harassment. In the meantime, feel free to stalk him on Instagram while you hide in your cubicle at work and wonder how he has literally zero wrinkles.