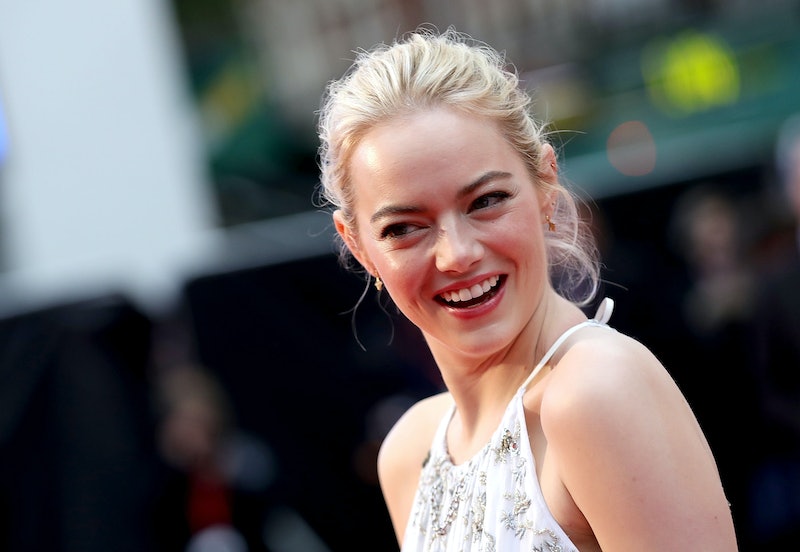 Emma Stone is known for staying mum when it comes to details about her personal life, so don't expect cutesy Instagram pics to hint at who the tabloids are claiming her new beau is. According to Page Six, Emma Stone has a new boyfriend, and, even better, they may have actually worked together before. Page Six reports that Stone is dating Dave McCary, a Saturday Night Live writer and segment director. Just how long the two have reportedly been going steady has yet to be confirmed. (Bustle has reached out to Stone's rep for confirmation on the rumor, but did not receive an immediate response.)

However, if the rumors are true, then it's safe to assume that the pair crossed paths on more than one occasion on the SNL set. Stone has hosted the show twice, and recently appeared as a surprise guest during the September 30 premiere with fellow La La Land star Ryan Gosling.

Stone and McCary were spotted together as recent as June 2017, leaving the Hollywood premiere of McCary's Brigsby Bear, but other than that, the couple has kept their romance completely under wraps. In a 2015 interview with Wall Street Journal, back when the star was dating actor Andrew Garfield, Stone explained just why she chooses to keep her relationship status out of the public eye, saying:

"See, I never talk about this stuff for this exact reason — because it’s all so speculative and baseless. Once you start responding — once you’re like, 'No, that’s not true' — then they’re like, 'Well, if we push enough, we’ll get a comment, so let’s see what else we can make up.' I understand the interest in it completely, because I’ve had it, too. But it’s so special to me that it never feels good to talk about, so I just continually don’t talk about it."

In other words, Stone would like for everyone to just mind their business. But seeing as that's not exactly how Hollywood works, she's choosing to take matters into her own hands — keeping every single detail about her personal and romantic life private. And seriously... who could blame her? It is nice, however, to know that the Oscar award-winning entertainer is potentially dating these days. After all, it has been quite some time since Stone and Garfield ended their three-year relationship.

Oh, and in case you were wondering, couples meeting on the SNL stage isn't anything out of the ordinary. Page Six also points out that, along with Stone, some of Hollywood's finest, such as Ben Affleck and Scarlett Johansson, have also made love connections with the sketch comedy's talented staff. Affleck has been linked to SNL show producer Lindsay Shookus, and Johansson is rumored to be dating Colin Jost, SNL writer and "Weekend Update" co-host.

By the looks of McCary's Instagram page, posting about his romantic relationships isn't seemingly something that he's fond of either. Just as Stone does, the filmmaker and writer pretty much keeps things lowkey by only posting about things relevant to his work and bromance with eight grade buddy and fellow SNL staff member and actor Kyle Mooney. And don't expect to read too many of McCary's 140-character deep thoughts on Twitter, either, as he's yet to post any tweets on the platform. It appears Stone may have lucked out in finding someone who's just as uninterested in making tabloid headlines as she is, because McCary seems to want nothing to do with being in the limelight.

Stone is definitely teaching celebrities a thing or two about privacy. Because, as she's shown throughout the duration of her career, if you truly want to keep things sacred, you absolutely can.