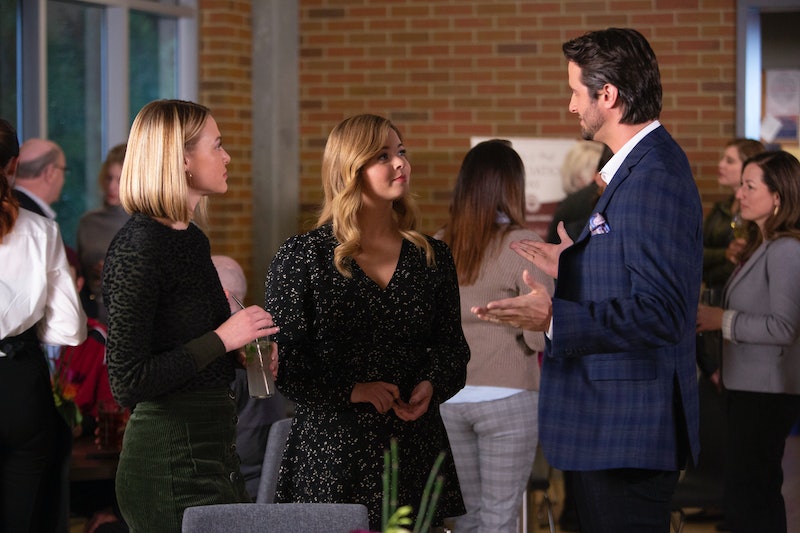 Alison and Mona moved to Oregon on PLL: The Perfectionists to work at Beacon Heights University and, I don't know, teach the privileged youths of America, but let's be real — Alison and Mona also moved to Beacon Heights to solve some mysteries. These women know trouble, and they seem to run right towards it. But, as on Pretty Little Liars, there could be people gunning for them, too. Who is Gabriel Evaristo on PLL: The Perfectionists? This new professor is hot, but he's probably not to be trusted.

Gabriel is the new language studies professor at Beacon Heights University, and he's, according to him, "on loan from the University Of Buenos Aires." He and Alison meet at a speed-meeting mixer for the faculty at BHU, and they hit it off instantly. Gabriel is really too good to be true. He's kind and smart, and he taught ballroom dancing to pay his way through college. He's funny, too, but he's also married. Yep, this new guy is in an open relationship with his wife, which he explains only after he tries to kiss Alison while the two are hanging out in their apartment. Ali is not into it, both because she's not into the open relationship thing and because she doesn't sound like she's ready to date post-Emily.

Gabriel is not a character in The Perfectionists novels, so all we know about Gabriel is what's been presented to us. That means more secrets, and probably fewer reasons to trust him than anyone else. And that's said, because given everything that's happening with Dana Booker and Claire Hotchkiss, Ali could use more allies at Beacon Heights University. It would be nice for her to have all the friends she can get. That said, every Pretty Little Liars fan knows that no one should ever be trusted. Alison knows by now that trust is what gets you thrown into a fake dollhouse with your friends.

Gabriel also seems to know Taylor Hotchkiss, which, if this were any other place, would be normal. Taylor is a part of Beacon Heights University, her parents created the university, and Gabriel works for the university. These are everyday connections if you're not in a Pretty Little Liars universe. But Taylor is fresh back off of faking her own death, and her insistence to be included in all of Alison and Mona's planning and scheming against Dana is suspect. The lady doth protest too much, and she should give them more time to trust her.

What if Gabriel and Taylor are working together with Claire and Dana to extract as much information from Alison as possible? Gabriel is the sweet talker, and Alison sees herself in Taylor. Usually, Alison's guard is way, way up, but given her recent divorce and the way she thinks about Taylor, Alison could be giving up much more than she lets on. So until Gabriel proves his worth on The Perfectionists, Alison needs to keep this new guy at arm's length.

More like this
These Memes & Tweets About Alicent in 'House Of The Dragon' Prove She's The Queen Of Messiness
By Grace Wehniainen
How Much Are The 'Schitt’s Creek' Stars Worth?
By Hugh McIntyre
The ‘Kevin Can F**k Himself’ Season 2 Finale Twist Is A Full Circle Moment
By Grace Wehniainen
Did 'Grey’s Anatomy' Just Drop A Major Taylor Swift Easter Egg?
By Grace Wehniainen
Get Even More From Bustle — Sign Up For The Newsletter